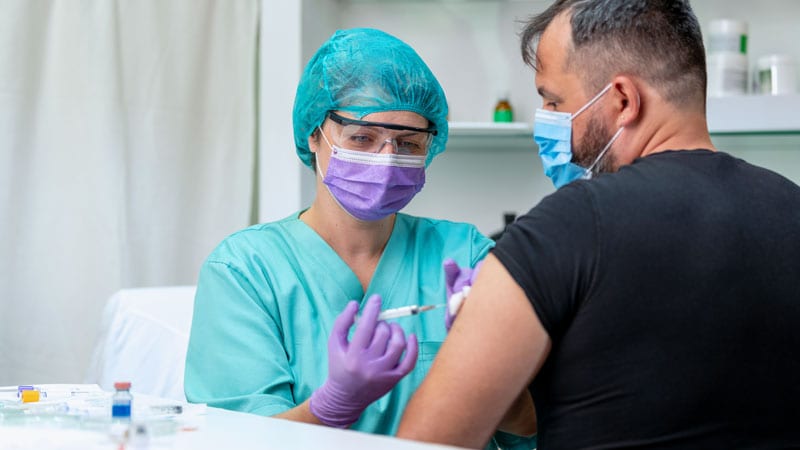 Leaders of Operation Warp Speed (OWS), the White House’s team tasked with developing a vaccine for COVID-19 by the end of this year, today told a US Senate Appropriations subcommittee it is on track to meet its goal.

OWS brings together federal officials, scientists, and drug companies in the effort. Its objective includes development, manufacturing, and distribution of a vaccine, as well as development of COVID-19 treatments.

Francis S. Collins, MD, PhD, director of the National Institutes of Health, told members of the Labor, Health and Human Services, Education, and Related Agencies subcommittee, “In record time, the very first vaccine [Moderna’s mRNA-1273] went from knowing what the sequence of this viral genome was to injecting the first patient in a phase 1 trial in 63 days. That’s a world record by a long shot.”

Other candidate vaccines are also moving ahead in clinical trials.

“We are all optimistic that the goal we have set to have a vaccine that works and is safe by the end of 2020 will be met by one of the vaccines. We would then have by early 2021 300 million doses of a vaccine that is safe and effective,” Collins said.

Will Vaccine Components Be Ready to Go?

A senator asked Disbrow about what is being done to ensure that the syringes, bandages, vials, and other components of the vaccination process won’t be in short supply in the same way other items often made overseas were hard to get, such as masks and swabs.

“This pandemic has highlighted the vulnerability in our supply chains for medical devices, raw materials, and pharmaceutical ingredients,” Disbrow acknowledged.

“We are working for needles and syringes and vials to expand domestic capacity so we don’t have to worry about this in the near future. We are also working with all of our manufacturers to ensure that they acquire all of the raw materials needed to manufacture vaccines and therapeutics ― because therapeutics are also important ― so they can manufacture at scale, ” he said.

Robert R. Redfield, MD, director for the Centers for Disease Control and Prevention, told the panel they are working on the twin priorities of vaccine distribution and vaccine acceptance.

He said one key element has been getting $12 billion to public health departments in the past 8 weeks to help make up for “decades of underinvestment” so they can build their capacity for fighting COVID-19.

Deciding who will get the eventual vaccine in what order and ensuring equal access by racial and ethnic groups require oversight by an entity outside the federal government, Collins said. He disclosed that OWS is in talks with the National Academy of Medicine (NAM) to perform that role.

“We think that is best done by an organization that is not itself governmental. It’s still the case that people are a little uneasy about the government calling the shots here,” Collins said.

He said agreement by the NAM “looks promising,” and he expected a set of principles for distribution of the eventual vaccine by Labor Day.

Ensuring that all groups will be equitably benefited by the vaccine must be a top priority, Sen. Patty Murray (D-WA) said.

“People in the black community, Latino community, and tribal communities are three to five times more likely to be hospitalized for COVID-19 than white people, and the death rate for people of color is two to three times that for white people,” she said.

Murray agreed that a vaccine is the best hope for stopping the virus but said she is “alarmed that while this administration has invested heavily in vaccine development, it is treating other priorities as an afterthought by investing far less in better diagnostics that can identify infections early in the course of the illness and prevent further spread.”

She urged caution in moving too fast, even with immense pressure to do so.

“A vaccine that is fast but ineffective will fall short of what is needed to turn the tide on this pandemic,” Murray said.

Marcia Frellick is a freelance journalist based in Chicago. She has previously written for the Chicago Tribune and Nurse.com and was an editor at the Chicago Sun-Times, the Cincinnati Enquirer, and the St. Cloud (Minnesota) Times. Follow her on Twitter at @mfrellick.