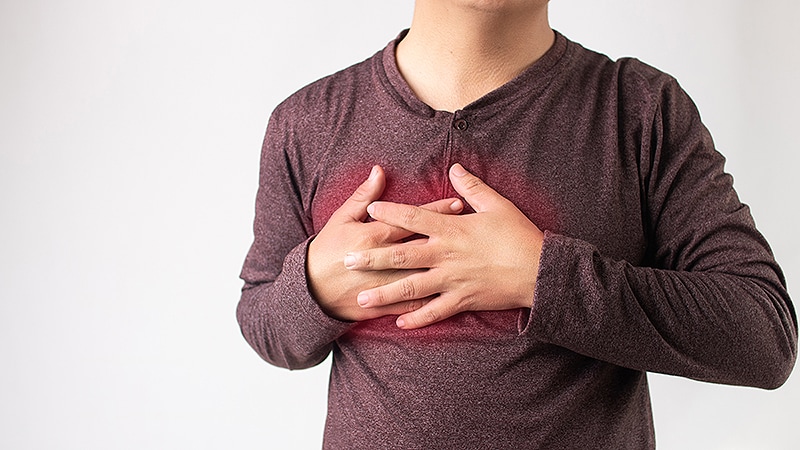 The brain’s reaction to stress may be an important contributor to chest pain in patients with coronary artery disease (CAD), according to results of a cohort study.

“Although more research is needed, these results may potentially shift the paradigm by which angina is evaluated by refocusing clinical evaluation and management of psychological stress as adjunct to traditional cardiac evaluations,” wrote Kasra Moazzami, MD, MPH, of Emory University in Atlanta, and his coauthors in Circulation: Cardiovascular Imaging.

To determine if an association exists between stress-induced frontal lobe activity and angina, the researchers launched a study of 148 patients with stable CAD. Their mean age was 62, 69% were male, and roughly 36% were Black. Angina symptoms were assessed at baseline and also after 2 years through the Seattle Angina Questionnaire’s angina frequency subscale.

At 2-year-follow-up, 28 (24%) of the 112 returning patients reported an increase in angina episodes. Those patients had a higher mean inferior frontal lobe activation with mental stress at baseline, compared with returning patients who reported a decrease in chest pain frequency (1.82 vs 0.92; P = .01).

After adjustment for sociodemographic and lifestyle variables, any doubling in inferior frontal lobe activation led to an increase in angina frequency by 13.7 units at baseline (95% CI, 6.3 – 21.7; P = .008) and 11.6 units during follow-up (95% CI, 4.1 – 19.2; P = .01). After relative importance analysis, the most important correlate of angina was found to be inferior frontal lobe activation at 36.5%, followed by Beck Depression Inventory score and PTSD checklist score.

“It Shows That the Heart and Brain Are Connected”

“Previous studies have linked mental stress with ischemia using nuclear stress testing. This study is unique in that it looked at brain activity associated with mental stress and was able to correlate that activity with angina,” said cardiologist Nieca Goldberg, MD, of NYU Langone in New York City in an interview. “It shows that the heart and brain are connected.”

The authors acknowledged their study’s limitations, including using standard stress-inducing protocols that did not account for or reflect any real-life stressors. In addition, although their methods are still considered clinically relevant, retrospectively collecting angina symptoms via questionnaire rather than a prospective diary could have led to incomplete responses.

Dr. Goldberg noted that additional research should include a more diverse population — women in particular were underrepresented in this study — while focusing on how interventions for stress can play a role in angina symptoms and brain activity.

That said, she added, “until there are more studies, it is important to consider mental stress in assessing angina symptoms in patients.”

The study was supported by grants from the National Institutes of Health. The authors reported no potential conflicts of interest.

This article originally appeared on MDedge.com, part of the Medscape Professional Network.