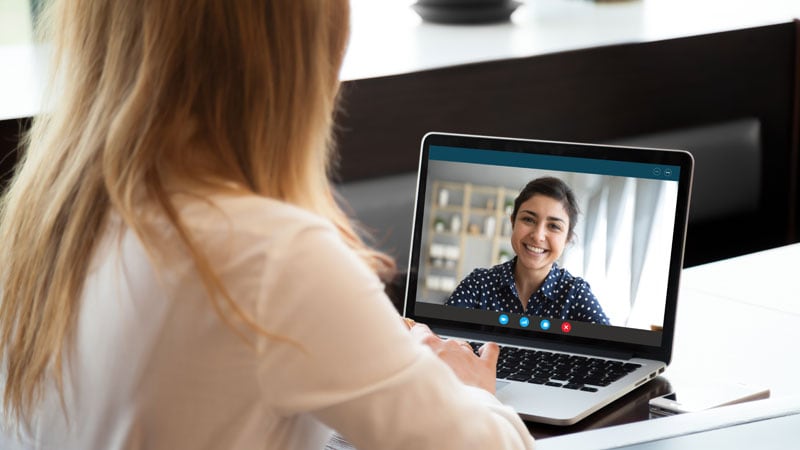 Ramie Fathy visited more than a dozen medical schools as an applicant. Even now, three years later, he still remembers the moment the University of Pennsylvania emerged as his top choice. He walked into the atrium of a building, saw the Philadelphia skyline, and knew it was a place he could see himself. “I’ve probably forgotten everything I heard on my interview day, but really what stuck with me was that feeling.”

That kind of gut feeling may be a thing of the past. In response to the COVID-19 pandemic, the Coalition for Physician Accountability issued a statement in mid-May recommending medical schools and residencies replace in-person visits with virtual interviews.

The shift is partly designed to reduce anxiety, says Geoffrey Young, PhD, senior director of student affairs and programs at the Association of American Medical Colleges (AAMC), which is part of the coalition that made the recommendation. With canceled licensing tests and other educational disruptions, “It’s a crazy, scary, overwhelming time,” Young says. “We’ve just been trying to think about how we might reduce some of that confusion and unnecessary stress and anxiety.”

The change presents challenges for both programs and their applicants, particularly because the kind of personal connections that often guide decisions can be hard to develop online. Still, some experts and participants see opportunity. If done right, they say, virtual interviewing practices may overhaul a problematic application process in ways that could outlast the pandemic.

During campus visits, future med students and residents get a feel for a place and its people. They also use the opportunity to “sell themselves” to potential educators and supervisors. The decision to go virtual aims to safely provide applicants with a way to do this, Young says. However, adapting to a virtual interview process quickly, during a pandemic, is inherently challenging.

There are likely significant bumps ahead, says Tom Varghese Jr, MD, a thoracic surgeon and program director of the cardiothoracic surgery fellowship at the University of Utah in Salt Lake City. “There is a comfort level with in-person interviews that all of us have, because that’s what we’ve been doing,” he says. “I don’t think any of this is going to be smooth.”

Equal opportunity and resource inequality are concerns when changes rely on technology, says Ilana Rosman, MD, an associate professor of dermatology and pathology at the Washington University School of Medicine in St Louis, Missouri.

Some applicants have better access than others to reliable, high-speed Internet and devices with high-quality audio and video capabilities, she says. And although some medical schools offer specific counseling and information about how students can best present themselves onscreen, other institutions have not provided any guidance.

The same discrepancy is true for schools: Institutions with deeper pockets can create new platforms and spiff up their websites to highlight their facilities for applicants; those without must depend on pre-pandemic marketing resources.

The technology itself is also a concern. Videoconferencing platforms that work for generic meetings may not be adequate for high-stakes residency interviews, which require smooth connections between multiple people. “If something goes wrong with the technology on either end, that introduces a huge amount of stress and anxiety into an already stressful situation for the students,” Rosman says. “That could really negatively impact their experience and how they convey themselves to the program.”

Another crucial challenge is that programs must figure out how to re-create that “feel” for an institution and its culture that candidates get when they visit the campus. Those intangibles often help both parties assess each other. “There’s really nothing that substitutes for being there,” Rosman says.

How Institutions and Applicants Should Prepare

In order to adapt to virtual interviews, programs need to rethink standard practices, Varghese says. To smooth the process, Varghese helped write a virtual primer containing practical guidance, such as the suggestion that faculty keep cellphone numbers of interviewees handy, in case technology breaks down. He also advises them to monitor body language and use standardized questions to gauge skills, like compassion and stress tolerance. For example, a fellowship interview might include a question such as, “Tell us about a bad complication you had during general surgery residency and what you did about it.”

The AAMC has provided resources for both interviewers and applicants. Tips for interviewees include testing Internet speed, looking at the camera instead of the screen, and thinking carefully about where to sit in terms of lighting and clutter. The University of Arizona has also released a video of virtual interviewing strategies. Their tips include using individualized meeting rooms in Zoom, implementing features like waiting rooms and doorbells, and creating opportunities for informal and private conversations with residents.

For program directors, Varghese says, preparation and practice is essential to ensure that the technology is working and that faculty understand the process. Depending on the circumstances, he says, it can be beneficial to review prerecorded videos sent in by applicants but also have real-time conversations over videoconferencing platforms. He recommends carefully considering the types of questions so they are open-ended enough to reveal an applicant’s way of thinking. “It’s a very thoughtful, deliberate process,” Varghese explained. “You can’t wing this.”

Anti-bias training for all faculty members is another important strategy, Varghese says. This can help interviewers overcome a tendency to make snap judgements about candidates, which is especially important for applicants who come from nontraditional or less privileged backgrounds. He points out that all institutions have certain “types” of candidates they assume will succeed. “We have to make sure that we interview broadly and that we use methods to overcome that implicit bias, to make sure that those who are coming from unconventional backgrounds aren’t disenfranchised as a result of the virtual interview format.”

Institutions are not the only ones that should be bracing for these changes. Applicants should plan on more preparation time, Rosman says. Without the ability to develop a sense of a place from campus visits, she advises that candidates think ahead about what matters most to them in a program and even reach out to directors in advance to ask questions.

Direct conversations are more valuable than searching the Internet, she adds. Conversations between applicants and current residents might also become more important than ever, which is something administrators are thinking about how to facilitate.

“This process will make it harder for a program and applicants to get to know each other, and one downside of that is that sometimes students rely on information that may not be reliable,” Rosman says. “Applicants really need to be mindful of the pros and cons of social media and the information that they’re getting there.”

At Washington University, Rosman is already anticipating changes she’ll need to implement before she conducts interviews early next year. In normal times, she says, candidates participate in a series of 8-minute interviews with 10 or more faculty members during campus visits. Concerned about the feasibility of moving people that quickly through virtual videoconferencing rooms, she and her colleagues are instead considering longer interviews, more interview days, and fewer interviewers for each candidate.

Rosman and her Washington University colleagues are also looking into strategies for highlighting the city and the institution to applicants who can’t be there in person. She says a working group of faculty and trainees is exploring a multimedia experience that would highlight St. Louis, the hospital, and the school, along with short videos that illustrate clinical spaces and didactic conferences to provide a feel for the culture of the program.

Getting everything in line will be a challenge, but they hope to finish strategizing with plenty of time left to practice before implementing new protocols. “COVID-19 has certainly added new layers of complexity to the entire residency program planning process,” Rosman says.

With deliberate planning, the virtual interview process could benefit all involved, Varghese says. The interview process had a number of problems prior to the pandemic that may be solved by shifting to a virtual format.

In-person interviews, for example, require candidates to spend money, sometimes even taking out loans, to travel to various sites. Online interviews eliminate such expenses. They also reduce the system’s contribution to climate change. Ultimately, they could even boost racial and ethnic diversity, especially if programs make an effort to create mentorship and networking opportunities for candidates from underrepresented groups, Rosman says.

Even after the pandemic is over, experts speculate that virtual interviews might become a standard part of the application process, in addition to on-campus visits. They offer an opportunity to make the system work better for more people, including those with disabilities and those strained by travel.

These changes represent a potential opportunity to reduce costs, avoid bias, and increase opportunities, according to administrators. “I think it has the potential to be really beneficial to programs and to applicants,” Rosman says. “Beyond this crisis, we can implement what we’ve learned from conducting virtual interviews to improve the process in the long term.”

For now, many unknowns remain. Fathy, the third-year Penn med student, was planning to take a year off after medical school to get research experience. However, given the uncertainties brought about by the pandemic, he has decided to apply for residencies earlier, even as he remains apprehensive about the virtual process. To get a feel for institutions without visiting them, he plans to spend more time looking at their websites, investigating their research emphases, and looking into where alumni of the program ended up.

Beyond concerns specific to the interview process, Fathy also worries about not being able to complete away rotations, which potential candidates and programs often use to get a feel for each other. He says that these “audition rotations,” as they’re often called, are almost entirely canceled this year. Fathy recalls how he made lasting friendships during his medical school tours and often thinks back to how he felt during the campus visit that so heavily influenced his choice in medical schools. “It was the physical impression and those kind of flashbulb memories that defined my impression of the institution,” he recalled.

For now, institutions and applicants can only hope that virtual experiences can produce those same kinds of impressions.

Emily Sohn is a freelance journalist in Minneapolis. Her stories have appeared in the Washington Post, NPR, Nature, National Geographic, and many other publications. She can be reached on Twitter @tidepoolsinc.