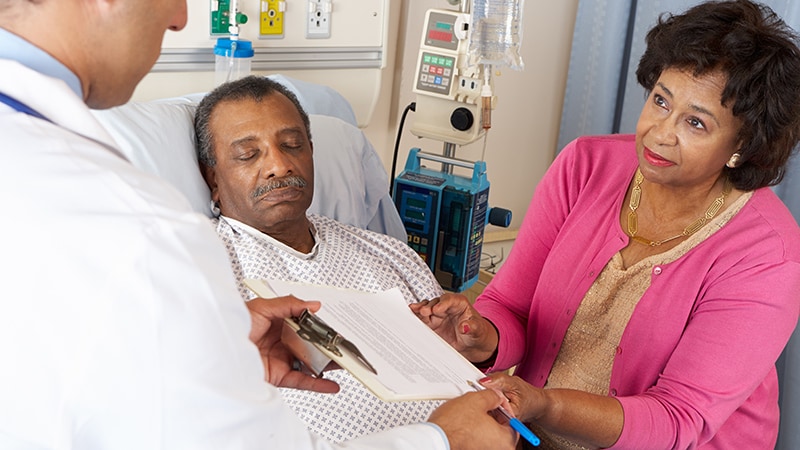 The burden of comorbidities, including diabetes, was greater for Hispanics and Blacks compared to Whites, but only in Blacks were PCI outcomes significantly worse even after controlling for such conditions and other baseline risk factors.

In the study based on patient-level data from the different trials, the adjusted risk of MI after PCI was increased 45% at 1 year and 55% after 5 years for Blacks compared with Whites. Their risk of death at 1 year was doubled, and their risk of major adverse cardiac events (MACE) was up by 28% at 5 years.

“Improving healthcare and outcomes for minorities is essential, and we are hopeful that our work may help direct these efforts, senior author Gregg W. Stone, MD, Icahn School of Medicine at Mount Sinai, New York City, told theheart.org | Medscape Cardiology.

“But this won’t happen without active, concerted efforts to promote change and opportunity, a task for government, regulators, payers, hospital administrators, physicians, and all healthcare providers,” he said. “Understanding patient outcomes according to race and ethnicity is essential to optimize health for all patients,” but “most prior studies in this regard have looked at population-based data.”

In contrast, the current study used hospital source records, which are considered more accurate than administrative databases, and event coding reports, Stone said, plus angiographic core laboratory analyses for all patients, “allowing an independent assessment of the extent and type of coronary artery disease and procedural outcomes.”

The “troubling” results “highlight the persistence of racial disparities in healthcare and the need to renew our focus on closing these gaps, [and] is yet another call to action for clinicians, researchers, and the healthcare system at large,” said Nanna, of Duke University Medical Center, Durham, North Carolina, and lead author on an editorial accompanying the published analysis.

Of the 10 randomized controlled trials included in the study, which encompassed 22,638 patients, nine were stent comparisons and one compared antithrombotic regimens in patients with acute coronary syndromes (ACS), the authors note. The median follow-up was about 1100 days.

White patients made up 90.9% of the combined cohort, Black patients comprised 4.1%, Hispanics 2.1%, and Asians 1.8% — figures that “confirm the well-known fact that minority groups are underrepresented in clinical trials,” Stone said.

There were notable demographic and clinical differences at baseline between the four groups.

For example, Black patients tended to be younger than White, Hispanic, and Asian patients. Black and Hispanic patients were also less likely to be male compared with White patients.

Hispanics were more likely to have ACS at baseline compared with Whites and less likely to have stable coronary artery disease (CAD) (P < .0001 for all differences). Similar proportions of Blacks and of Whites had stable CAD, about 32% of each, and ACS, about 68% in both cases.

Rates of hyperlipidemia and stable CAD were greater and rates of ACS was lower in Asians than the other three race groups (P < .0001 for each difference).

No significant increases in risk for outcomes at 1 and 5 years were seen for Hispanics or Asians compared with Whites.

Even with underlying genotypic differences between Blacks and Whites, much of the difference in risk for outcomes “should have been accounted for when the researchers adjusted for these clinical phenotypes,” the editorial notes.

Some of the difference in risk must have derived from uncontrolled-for variables, and “Beyond genetics, it is clear that race is also a surrogate for other socioeconomic factors that influence both medical care and patient outcomes,” they write.

As such, they agree, “The observed increased risk may be explained by differences that are not fully captured in traditional cardiovascular risk factor assessment, including socioeconomic differences and education, treatment compliance rates, and yet-to-be-elucidated genetic differences and/or other factors.”

Stone said that such socioeconomic considerations may include reduced access to care and insurance coverage; lack of preventive care, disease awareness, and education; delayed presentation; and varying levels of provided care.

“Possible genetic or environmental-related differences in the development and progression of atherosclerosis and other disease processes” may also be involved.

“Achieving representative proportions of minorities in clinical trials is essential but has proved challenging,” Stone said. “We must ensure that adequate numbers of hospitals and providers that are serving these patients participate in multicenter trials, and trust has to be developed so that minority populations have confidence to enroll in studies.”