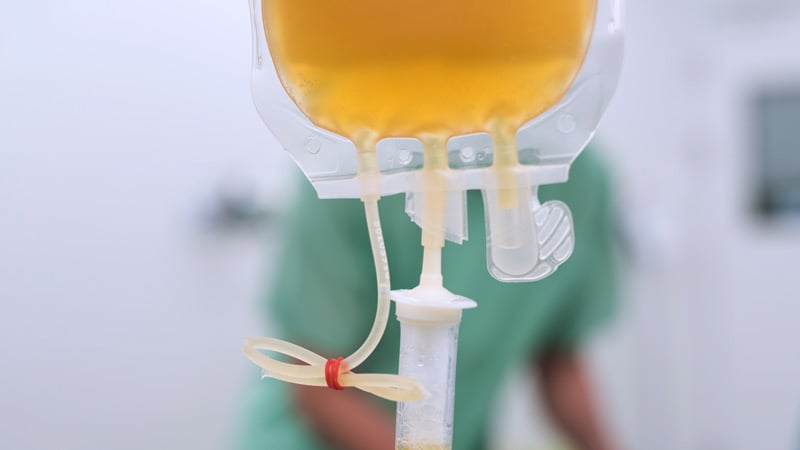 Plasma exchange (PE) with albumin replacement may be effective for slowing down symptoms of Alzheimer’s disease (AD), new research suggests.

Results from the phase 2b/3 AMBAR study showed that the treatment, which aims to remove amyloid beta (Aβ) from plasma, was associated with a 60% decrease in functional and cognitive decline in patients with moderate AD.

The results “open a new path for the development of plasma protein replacement therapies not only in Alzheimer’s but also in other degenerative diseases that we are planning to investigate,” Páez said.

The findings were presented at the Alzheimer’s Association International Conference (AAIC) 2020, which was held online this year because of the COVID-19 pandemic, and were simultaneously published in Alzheimer’s and Dementia.

PE treatments, which have been available for several decades, are used to treat a range of neurologic, immunologic, and metabolic disorders. The treatment involves plasmapheresis, whereby plasma is separated from blood cells (red blood cells, white blood cells, platelets, etc) and toxic substances are removed.

The albumin in plasma, to which plasma Aβ is bound, is replaced with a fresh commercial albumin product made from plasma from healthy donors.

“Our initial hypothesis was that by removing albumin together with A beta [amyloid beta] and substitute it with newer albumin periodically, we may be removing A beta from the cerebrospinal fluid and eventually from the brain,” Páez said.

The AMBAR study included 347 men and women aged 55 to 85 years with probable AD dementia who were enrolled at 41 sites in Spain and the United States. All were diagnosed with mild AD, as shown by a baseline Mini–Mental State Examination (MMSE) score of 22 to 26, or moderate AD, having a baseline MMSE score of 18 to 21.

Investigators randomly assigned the participants to four groups; one group received placebo, and each of the other three treatment arms received different doses of albumin and intravenous immunoglobulin (IVIG) replacement.

During the first 6-week study phase, patients received weekly sham (placebo) or conventional PE treatments of 2.5 to 3 liters of plasma, which Páez referred to as the “intensive-treatment phase to remove as much A beta as possible.”

This was followed by a 12-month maintenance phase, which involved monthly low-volume (700 – 800 mL) plasma exchange or sham treatments.

Results showed a reduction in the progression of symptoms in the PE-treated patients for both primary endpoints.

There were no clear differences between the three active-treatment groups, “suggesting that any of them could be considered for further investigation,” said Páez.

Differences in baseline demographic characteristics did not appear to have an influence on the outcomes.

ADAS-Cog was more than twice as effective as some candidate monoclonal antibodies targeting Aβ that are being investigated for AD, Páez noted.

Although the PE approach is relatively invasive, so, too, are monoclonal antibody therapies that are infused intravenously through a pump, he said.

In addition, a low-volume PE maintenance treatment takes less than 2 hours, which is on a par with some monoclonal antibody treatments, he said.

For both primary outcomes, changes were found in those with moderate but not mild AD, possibly because the ADAS-Cog was designed for patients with more severe symptoms and may not be sensitive enough for patients with better cognitive performance, said Páez.

However, the difference between mild and moderate AD did not hold up in post hoc analyses that included additional baseline characteristics, including amyloid and APOE Ɛ4 status.

“We observed that both mild and moderate subjects performed better than placebo even in the two coprimary endpoints,” Páez said. “It suggested that the differences between mild and moderate patients was not so apparent.”

For AD biomarkers in the moderate AD study population, levels of CSF Aβ42 and tau protein remained stable in the treated patients. In the placebo group, Aβ42 was decreased and tau protein increased. Páez explained that if amyloid in the brain comes from the CSF, this process may take some time.

The findings suggest that more than one mechanism may be involved in the PE approach, such as changes in oxidation status and inflammatory mediators, the investigators note.

About 28% of the participants dropped out of the study, which the researchers note is a rate similar to that reported in studies of solanezumab and other treatments in patients with AD.

“The high percentage (72%) of patients who completed the study further supports that this procedure is feasible in mild-to-moderate AD,” the investigators write.

Overall, adverse events (AEs) were similar to the known safety profile of PE procedures for other indications. The two most common AEs were catheter local reactions and hypotension.

Almost 90% of the apheresis procedures were “uneventful,” the researchers report.

Two patients (0.6%) died during the study, which is similar to the low mortality rates reported elsewhere, they add.

However, the investigators stress that because many patients with AD are in fragile health, PE treatments should be undertaken with caution, because of its invasive nature.

Páez noted that a possible limitation of this treatment approach is the availability of plasma for manufacturing plasma products. In the future, this PE approach might be combined with current and future AD therapies, the researchers write.

They are currently in discussions with the American Society for Apheresis, which develops guidelines for PE. After additional research, the investigators hope to eventually receive US Food and Drug Administration approval of PE with albumin replacement as a treatment for AD.

Commenting for Medscape Medical News, Pierre N. Tariot, MD, director, Banner Alzheimer’s Institute, and research professor of psychiatry at the University of Arizona College of Medicine – Phoenix, said the study is “meaningful and large enough” to “come close” to determining whether the therapy is safe and effective.

“The fundamental rationale for this experimental approach, while speculative, is reasonable and certainly seems to be worth testing,” said Tariot, who was not involved with the research.

However, “there’s a decent chance” that not all trial participants had AD, he noted. Although some CSF amyloid measures suggest levels consistent with AD, “this is not conclusive,” he said.

In addition, “there’s a slightly low rate of apolipoprotein E 4 allele carriage [in the current study] compared to most Alzheimer’s trials,” Tariot said.

He also pointed out that the trial failed to show statistical significance on both coprimary outcomes. “It’s unclear what health authorities, if presented with these data, would decide to do with the file.”

Although it was “encouraging” that secondary endpoints were supportive, the fact that they had greater statistical significance than some of the other objective measures “raises at least the potential for partial unblinding as a result of side effects,” said Tariot.

It is also unclear why changes would be more evident in the moderate subpopulation, he added.

The study was funded by Grifols. Páez is an employee of Grifols. Tariot has reported no relevant financial relationships.