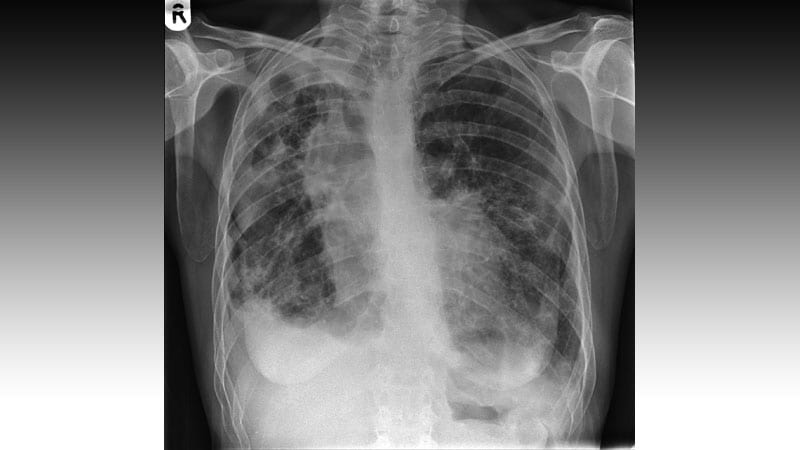 Brensocatib, an experimental small-molecule inhibitor targeted to inflammation-regulating neutrophil serine proteases, may be a novel, nonantibiotic option for reducing exacerbations in patients with bronchiectasis, investigators in the phase 2 WILLOW study said.

“We also observed a dose-dependent reduction in neutrophil elastase levels in sputum, which supports the mechanism of action of this drug, and importantly showed a link between reducing neutrophil serine protease activity and clinical benefits in people with bronchiectasis,” he said in at the American Thoracic Society’s virtual clinical trial session.

“This is a very important trial, a landmark trial for people with bronchiectasis, because this is a drug that for the first time appears to be able to target directly neutrophilic inflammation, resulting in clinical benefit,” he said.

Pulmonologist Jennifer L. Taylor-Cousar, MD, MSCS, of National Jewish Health in Denver, who was facilitator for the online presentation but was not involved in the study, said that it offered welcome news.

“For those of us who treat bronchiectasis, a safe and effective anti-inflammatory has really been the Holy Grail, so this is really exciting,” she said.

Brensocatib is an inhibitor of dipeptidyl peptidase 1 (DPP1), a lysosomal cysteine protease that is responsible for NSP activation in bone marrow during the neutrophil maturation cycle.

In phase 1 trials, brensocatib was associated with a dose-dependent reduction in neutrophil elastase in healthy volunteers.

In the phase 2 WILLOW trial, patients with bronchiectasis not related to cystic fibrosis were screened and stratified by Pseudomonas aeruginosa on sputum culture and use of macrolide antibiotics and then randomized in equal proportions to receive either brensocatib at daily oral doses of 25 mg or 10 mg, or placebo for 24 weeks, followed by a 4-week off-treatment period.

In both brensocatib groups there were significant reductions from baseline neutrophil elastase concentrations in sputum, compared with placebo (P = .034 for 10 mg and .021 for 25 mg). During the 4-week period following treatment neutrophil elastase levels in both active drug arms rose rapidly and returned to baseline.

The importance of these reductions was reflected in pooled data from the two brensocatib cohorts, which showed that patients who achieved neutrophil elastase levels below the limit of quantification had a significantly lower incidence of bronchiectasis exacerbations (HR 0.28, P < .0001).

Although the study was not powered to compare changes in postbronchodilator forced expiratory volume in 1 second (FEV₁) levels, placebo-treated patients had a numerically larger decline in lung function from baseline, compared with brensocatib-treated patients.

Expected adverse events with brensocatib included those associated with Papillon-Lefèvre syndrome, a rare congenital condition caused by the absence of the gene coding for DPP1, resulting in keratinization leading to redness, thickening of soles and palms, and severe, destructive periodontal disease, as well as reduced immune response to bacterial infection.

Serious TEAEs occurring in more than 3% of patients in any group included infective exacerbations in three patients on placebo, none on the 10-mg dose, and four on the 25-mg dose of brensocatib. Respective numbers of patients with treatment-emergent pneumonia were three, zero, and four.

Adverse events of special interest included skin events in 10 patients on placebo, 12 on the 10-mg dose, and 21 on the 25-mg brensocatib dose. Dental changes occurred in 3, 13, and 9 patients, and infections in 9, 12, and 14 patients, respectively.

A phase 3 study to confirm efficacy and establish the optimal dose of brensocatib is planned for the end of 2020, “COVID willing,” Dr. Chalmers said.

Dr. Chalmers disclosed consultancy with and research funding from Insmed, which funded the study. Dr. Taylor-Cousar has disclosed grants and/or personal fees from various companies.

This article originally appeared on MDEdge.com.