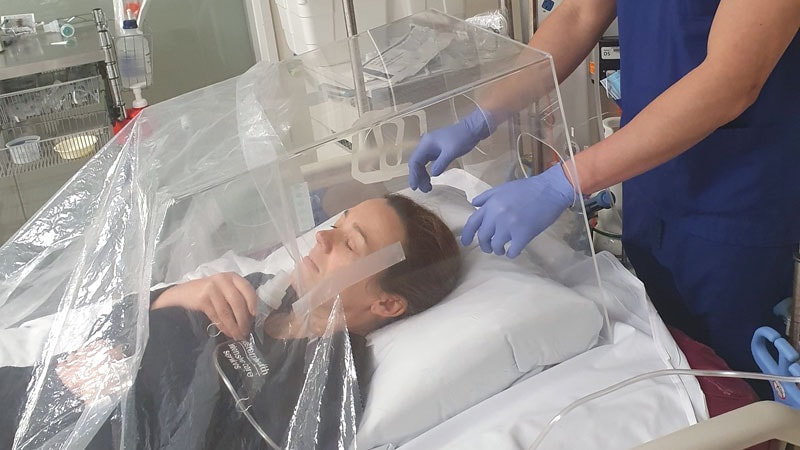 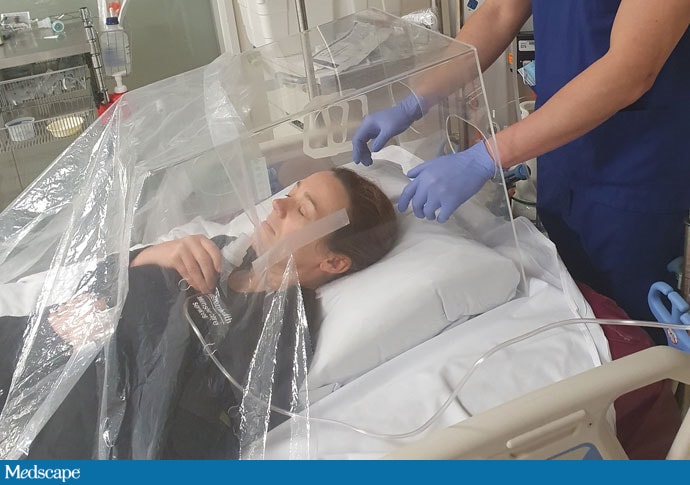 Joanna P. Simpson, MbChB, an intensivist in the Department of Anaesthesia and Perioperative Medicine at Eastern Health in Melbourne, Victoria, Australia, and colleagues, tested five models of barriers used for protection while intubating simulated “patients” with COVID-19 and compared the interventions with a control of having no protection. They published their findings online Thursday in Anaesthesia.

Coauthor Peter Chan, MBBS, also an intensivist at Eastern Health, told Medscape Medical News the virus essentially concentrates inside the box and because the box has holes on the sides to allow providers’ arms in, the gaps “act as nozzles, so when a patient coughs, it creates a sudden wave of air that pushes all these particles out the path of least resistance” and into the face of the intubator.

Their institution stopped using any such aerosol-containment devices during intubation until safety can be proven.

Many Forms for Boxes

The boxes take different forms and are made by various designers and manufacturers around the world, including in the United States, but they generally cover the head and upper body of patients and allow providers to reach through holes to intubate.

The US Food and Drug Administration (FDA) on May 1 issued an emergency use authorization (EUA) for “protective barrier enclosures…to prevent [healthcare provider] exposure to pathogenic biological airborne particulates by providing an extra layer of barrier protection in addition to personal protective equipment [PPE]”.

Nebulized saline was used in an aerosol-generating model for 300 seconds, at which point the devices were removed to gauge particle spread for another 60 seconds.

Plastic surgeon Dave Turer, MD, MS, who is also an electrical and biomedical engineer, and some emergency physician colleagues had doubts about these boxes early on and wrote about the need for thorough testing.

He told Medscape Medical News, “I find it kind of infuriating that if you search for ‘intubation box’ there are all these companies making claims that are totally unsubstantiated.”

A desperate need to stop the virus is leading to unacceptable practices, he said.

His team at the University of Pittsburgh Medical Center in Pennsylvania tested commercially available boxes using white vapor to simulate patients’ exhaled breath and found the vapor billowed into the surrounding environment.

He said Simpson and colleagues had similar findings: The boxes didn’t contain the patients’ breaths and may even increase the stream heading toward intubators.

Turer said his team has designed a different kind of box, without armholes for the intubators, and with active airflow and filtering and have submitted their design and research to the FDA for an EUA.

The FDA’s current EUA is for boxes “that are no different from a face shield or a splash shield,” Turer said, adding that “they specifically state that they are not designed or intended to contain aerosol.”

He said while this study is a good start, his team’s findings will help demonstrate why the common passive boxes should not be used.

One of the most prevalent designs, he pointed out, was one by Taiwanese anesthesiologist Hsien Yung Lai that was widely circulated in March.

David W. Kacƶka, MD, PhD, associate professor of anesthesia, biomedical engineering, and radiology at University of Iowa in Iowa City, is one of the researchers who modified that design and made prototypes. He told Medscape Medical News he thinks the study conclusion by Simpson et al is “not as dismal as the authors are making it out to be.”

He pointed to the relative success of the sealed box with suction. His team’s adapted model added a suction port to generate a negative pressure field around the patient.

The biggest critique he had of the study, Kacƶka said, was a lack of a true control group.

“They tested all their conditions with nebulized saline,” he pointed out. “I think a more appropriately designed study would have also looked at a group where no saline was being nebulized and see what the particle counts were afterwards. It’s not clear how the device would distinguish between a particle coming from a saline nebulizer vs coming from a simulated patient vs coming from the laryngoscopist.”

He also noted that what comes out of a patient is not going to be saline and will have different density and viscosity.

That said, the study by Simpson and colleagues highlights the need to take a hard look at these boxes with more research, he said, adding, “I think there’s some hope there.”

He noted that a letter to the editor by Boston researchers, published online April 3 in the New England Journal of Medicine, describes how they used fluorescent dye forced from a balloon to simulate a patient’s cough to see whether an aerosol box protected intubators.

That letter concludes, “We suggest that our ad hoc barrier enclosure provided a modicum of additional protection and could be considered to be an adjunct to standard PPE.”

The Anaesthesia findings come as a second global wave becomes more likely as does awareness of the potential of airborne droplets to spread the virus.

Scientists from 32 countries warned the World Health Organization that the spread of COVID-19 through airborne droplets may have been severely underestimated.

On Wednesday, the World Health Organization formally acknowledged evidence regarding potential spread of the virus through these droplets and on Thursday issued an updated brief.

Intellectual property surrounding the device invented by Turer’s team is owned by UPMC. Chan and Kaczka have disclosed no relevant financial relationships.

Marcia Frellick is a freelance journalist based in Chicago. She has previously written for the Chicago Tribune and Nurse.com and was an editor at the Chicago Sun-Times, the Cincinnati Enquirer, and the St. Cloud (Minnesota) Times. Follow her on Twitter at @mfrellick.