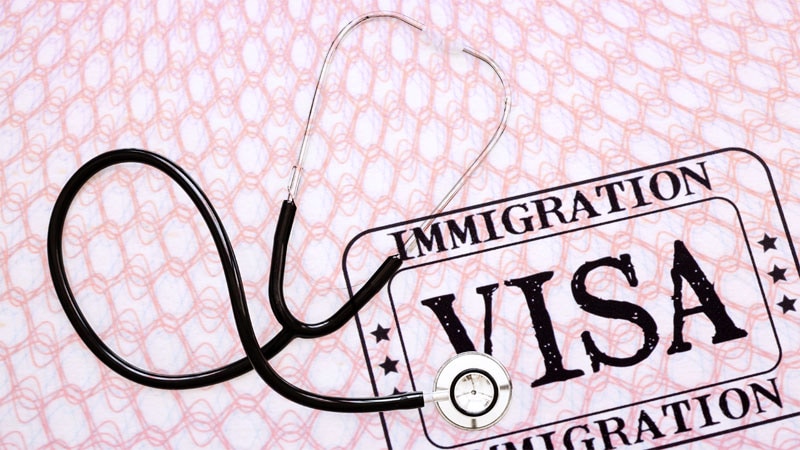 The suspension of most new work visas for entry into the United States, announced by President Trump on Monday, will not affect international medical graduates (IMG) who apply for J-1 visas to take up residency positions in this country, a US State Department official who asked not to be identified told Medscape Medical News.

International students who seek F-1 visas to attend medical school here also will not be impacted by the order, said Matthew Shick, senior director of government relations and regulatory affairs for the Association of American Medical Colleges (AAMC), in an interview with Medscape Medical News.

Recent US residency program graduates who hold J-1 visas will still be able to convert them into H-1B visas so that they can accept clinical positions in the United States, said Matthew Bourke, a spokesman for US Citizenship and Immigration Services. “J-1 visa holders currently in the United States are still permitted to change status through H-1B petition process to extend their stay and work in this country,” he said.

The White House order is not retroactive and does not revoke visas currently held by IMGs and others.

A broad swath of foreign physicians and medical researchers who seek H-1B visas will be affected by the presidential proclamation, however. The proclamation will remain in effect through the end of this year and could be renewed after that.

Whether a physician is accorded such a visa depends on what he or she plans to do in the United States. According to the State Department official, “Physicians who are seeking entry to the United States on an H-1B or L visa to provide medical care to individuals who have contracted COVID-19 and are currently hospitalized, or who are involved in the provision of medical research at United States facilities to help the United States combat COVID-19, may be considered for a national interest exception” to the proclamation.

The AAMC said in a news release that it is “deeply troubled by this proclamation, which will hinder our nation’s health care workforce and biomedical research enterprise. The medical residents, physicians, postdoctoral researchers, and graduate students who work and train in the United States with H-1B and J-1 visas are integral to providing health care nationwide. These individuals are also performing scientific research that is critical to advancements in the prevention, diagnosis, and treatment of the entire spectrum of illnesses, as well as future pandemics.”

The AAMC noted that sustaining the US healthcare workforce is clearly in the national interest. Moreover, it pointed out, “Over half of the current postdoctoral researchers in this country hold temporary non-immigrant visas and fill a critical need in the US labor market by providing specialized knowledge and skills in the development of innovative and cutting-edge biomedical research.”

In addition, Shick told Medscape Medical News, about a quarter of the IMGs who match to US residency programs hold H-1B visas, rather than J-1 visas. Smaller institutions sponsor these visas as a recruitment incentive, he noted, adding that if a residency graduate has an H-1B visa, they can stay here instead of having to return to their home country for 2 years.

“The ability [of IMGs who seek H-1B visas] to enter the US for training has been called into question,” he said. “We’re right at the time when programs start, on July 1; so if they haven’t already gotten their visa stamped by the consulates, they might be stuck outside the country until there’s clarification on their status.

“We’re also concerned about our research enterprises at institutions that often rely on foreign talent. In some cases, the researchers who come here use H1-B visas. As our statement pointed out, they’re often looking for cures for other conditions besides COVID.”

In the White House proclamation, the Trump administration argued that the visa suspensions would help protect the US labor force from immigrant competition at a time of mass unemployment because of the COVID-19 pandemic. This was also the argument used in an April 22 proclamation that suspended the issuance of green cards but exempted IMG physicians and other healthcare professionals.

Shick noted that US medical school graduates are matching to 96% of the slots available to them in residency programs. “So these IMGs aren’t taking jobs away from US grads,” he said. “They’re filling a need, and we’re able to recruit the best and brightest from around the world.”

The restrictions on IMGs entering this country will exacerbate the existing physician shortage in the United States, Shick predicted. The cap on the number of graduate medical education slots subsidized by Medicare has kept the growth in the physician workforce below the increase in patient demand, he noted.

“Now we’re talking about restricting H-1B visas on top of our current limitations. We’re currently turning away 50% of the IMGs who apply for residency. That has nothing to do with the immigration rules.”