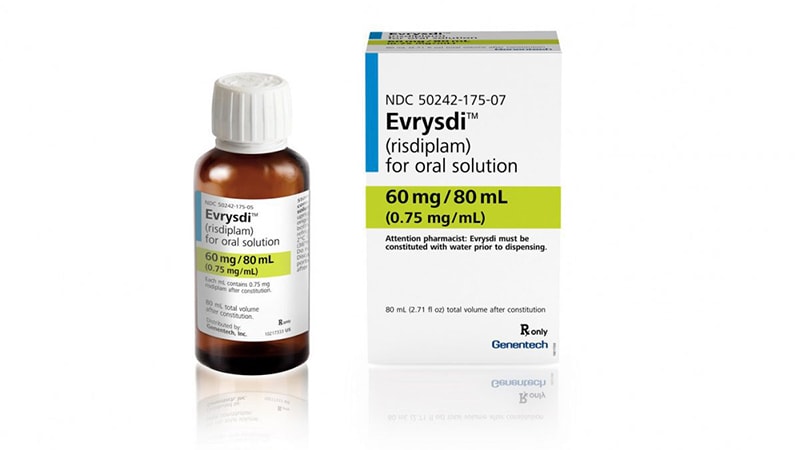 The US Food and Drug Administration (FDA) has approved risdiplam (Evrysdi, Roche and PTC Therapeutics) for the treatment of adults and children at least 2 months old who have spinal muscular atrophy (SMA).

This marks the first approval of an oral therapy for the rare and devastating condition.

Risdiplam provides “an important treatment option for patients with SMA, following the approval of the first treatment for this devastating disease less than 4 years ago,” Billy Dunn, MD, director of the Office of Neuroscience in the Center for Drug Evaluation and Research at the FDA, said in a release from the agency.

Today’s approval was based on the results from two trials. In the open-label FIREFISH study of infantile-onset SMA, 7 (41%) of the 17 participants (mean baseline age, 6.7 months) were able to sit independently for more than 5 seconds after 12 months of treatment with risdiplam.

This was a “meaningful difference from the natural progression of the disease because all untreated infants with infantile-onset SMA cannot sit independently,” the FDA noted.

In addition, 81% of the participants were alive after 23 or more months of treatment — and without need of permanent ventilation.

The second study was the randomized controlled trial known as SUNFISH and included 180 patients with SMA between the ages of 2 and 25 years. Those who received the study drug had an average 1.36 increase from baseline on a motor function measure vs a 0.19 decrease in function for those who received placebo.

The FDA noted that the most common treatment-related adverse events include fever, diarrhea, rash, ulcers of the mouth, arthralgia, and urinary tract infections.

The drug received fast track designation and priority review from the FDA, as well as orphan drug designation.

“Today marks an incredibly important moment for the broader SMA patient community that had been in dire need of safe and effective treatment options,” Stuart W. Peltz, PhD, chief executive officer of PTC Therapeutics, said in a company statement.

“Given [that] the majority of people with SMA in the US remain untreated, we believe Evrysdi, with its favorable clinical profile and oral administration, may offer meaningful benefits for many living with this rare neurological disease,” Levi Garraway, MD, PhD, chief medical officer and head of global product development for Genentech, added in their company’s press release. Genentech is a member of the Roche Group.

The drug is continuing to be studied in more than 450 individuals as part of a “large and robust clinical trial program in SMA,” the company reports. These participants are between the ages of 2 months and 60 years.

“The approval of Evrysdi is an eagerly awaited milestone for our community. We appreciate Genentech’s commitment to…developing a treatment that can be administered at home,” Kenneth Hobby, president of the nonprofit Cure SMA, said in the same release.

In May 2019, the FDA approved the first gene therapy for SMA — the infusion drug onasemnogene abeparvovec-xioi (Zolgensma, AveXis Inc).

Genentech announced that the new oral drug will be available in the United States within 2 weeks “for direct delivery to patients’ homes.”