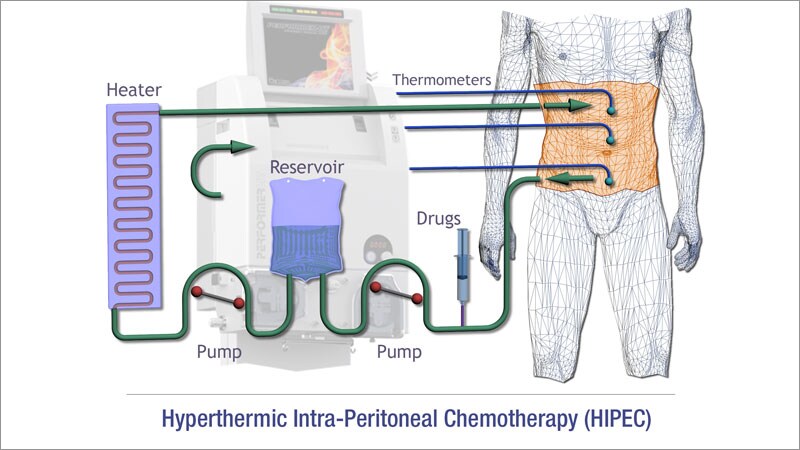 Patients with colorectal cancer (CRC) who have peritoneal metastases should only be treated in a specialized referral center and given systemic chemotherapy before cytoreductive surgery with hyperthermic intraperitoneal chemotherapy (CRS-HIPEC), suggest the results of several new studies in this relatively rare patient population.

The choice of intraperitoneal chemotherapy may not affect overall survival, with both oxaliplatin and mitomycin C “justified,” researchers commented.

The studies were presented July 3 at the ESMO 22nd World Congress on Gastrointestinal Cancer, which was held virtually because of the coronavirus pandemic.

Monica M. Bertagnolli, MD, professor of surgery at Harvard Medical School and chief of the Division of Surgical Oncology at Brigham and Women‘s Hospital and Dana-Farber Cancer Institute, Boston, Massachusetts, discussed the presentations.

She explained that about 5% of patients with CRC present with peritoneal carcinomatosis (CRPC) and another 5% develop metachronous CRPC. Given the global burden of CRC, this means the estimated incidence of CRPC is about 180,000 cases worldwide every year.

Bertagnolli said that there is agreement that CRPC is “best managed in a specialty center” and that the “best long-term survival” is offered by cytoreductive surgery plus chemotherapy.

However, there is “controversy” over whether HIPEC or systemic therapy is the best chemotherapeutic approach, she said.

Indeed, a 2018 randomized trial concluded that HIPEC “does not improve survival over surgery alone and may increase complication rates,” as previously reported by Medscape Medical News,

Bertagnolli said that there is also controversy as to what constitutes the optimum regimen, both for HIPEC and for systemic chemotherapy, with no consensus for the latter over whether to have neoadjuvant and adjuvant therapy or adjuvant therapy alone.

The four new studies, which were presented during a session on colorectal cancer, go some way to answering these questions, she commented, summarizing them as follows:

Bertagnolli said these “outstanding clinical researchers” should be congratulated for their “dedicated focus on this challenging colorectal cancer disease subset.”

“The results today show us that by standardizing treatment, tracking outcomes, and collaborating to conduct high-quality clinical trials, we can expect to see a better future of outcomes for these special patients,” she added.

Commenting on the presentations via Twitter, Pashtoon Kasi, MD, MS, a gastrointestinal oncologist at the University of Iowa Holden Comprehensive Cancer Center in Iowa City, said that he has “always been impressed with the overall survival” reported in this patient population, and adding that the design and conduct of the CAIRO6 pilot study was “truly worth applauding.”

Details of the CAIRO6 Pilot Results

The data from the CAIRO6 trial come from a pilot phase of this study reported at the meeting by Koen P. Rovers, MD, Department of Surgery, Catharina Hospital, Eindhoven, the Netherlands.

In explaining the background to this trial, he noted that there have been “no randomized trials on perioperative systemic therapy for isolated resectable colorectal peritoneal metastases.”

Consequently, there is a “wide variety in its administration and timing” between countries, hospitals, and even physicians. There are also a number of major concerns, he said, including that neoadjuvant therapy “may lead to high progression rates and secondary inoperability,” and increase the postoperative morbidity of an “already intensive” surgery.

As there were also concerns over the difficulty of enrolling patients, the team conducted a pilot phase of the CAIRO6 open-label, parallel-group, randomized superiority trial, involving all nine Dutch tertiary referral centers.

They recruited patients with pathologically proven peritoneal metastases of non-appendiceal colorectal adenocarcinoma, who had resectable disease on laparoscopy or laparotomy and who had not undergone systemic therapy in the past 6 months or previous CRS-HIPEC.

Of 233 eligible patients, 80 were randomly assigned; 37 started neoadjuvant therapy and 42 underwent CRS-HIPEC alone, as a result of 2 from the experimental group preferring upfront surgery.

There was also no significant difference in the number of patients with major postoperative morbidity, and no surgery related deaths.

This demonstrated that trial accrual, one of the main outcomes of the study, was “feasible” and that neoadjuvant treatment in this setting is “safe,” Rovers commented.

Next, he showed that 35% of patients experienced grade 3–5 systemic toxicity, with no therapy-related deaths, and tumor regression grade (TRG) 1–2 was seen in 39% of patients, with 29% having TRG1, indicting no residual cancer cells.

These results are comparable with those seen in previous studies, he said.

“These findings justify continuation of the currently ongoing phase 3 trial, which will provide the first intention-to-treat overall survival comparison of perioperative systemic therapy and cytoreductive surgery with HIPEC alone in these patients,” he added.

In her discussion, Bertagnolli said “these researchers showed that it is possible to recruit patients to this study design, which is a testament to the quality of the research team and the strength of their relationship with their patients.”

“We therefore look forward with great interest to the final results of the CAIRO6 trial,” she added.

The study showing long-term survival after CRS-HIPEC was presented by Checca Bakkers, MD, also from the Department of Surgery at Catharina Hospital.

Bakkers and colleagues conducted an analysis on 297 patients who  underwent CRS-HIPEC between 2005 and 2017, of whom 177 (60%) received mitomycin C for their intraperitoneal chemotherapy, while 120 (40%) had oxaliplatin.

The results, recently published in the European Journal of Surgical Oncology , show no significant difference between the two groups. Median overall survival was 30.7 months in the mitomycin group vs 46.6 months in the oxaliplatin group (P = .181), and on multivariable analysis no influence of intraperitoneal drug on survival was observed (adjusted HR, 0.77; 95% confidence interval 0.53 – 1.13), the team reported.

At 3 years, the overall survival rate was 44.7% in patients treated with mitomycin C and 53.5% for those given oxaliplatin.

While acknowledging that there were limitations to their study, Bakkers said that “this is the first study to investigate the effects of mitomycin C vs oxaliplatin in a nationwide data registry.”

She also noted that, as all the patients were treated in line with the Dutch HIPEC protocol, there was a large degree of homogeneity in the cohort.

“I think we can conclude that both oxaliplatin and mitomycin C are justified as chemotherapeutics during HIPEC for colorectal peritoneal metastases, as no overall survival benefit could be shown for one regimen over another,” Bakkers concluded.

Bertagnolli commented that “although this was not a randomized comparison, these high-quality observational data indicate that both oxaliplatin and mitomicin C are justified for use during HIPEC for colorectal cancer peritoneal metastases.”

The study reporting on the impact of systemic chemotherapy was presented by Rovers, making this the third presentation from the Dutch team.

To examine the impact of systemic chemotherapy, the team gathered data from the Netherlands Cancer Registry on individuals with pathologically proven peritoneal metastases of non-appendiceal colorectal adenocarcinoma and who underwent CRS-HIPEC at one of nine tertiary centers between 2005 and 2017 and were alive 30 days postoperatively.

Following ESMO Consensus Guidelines, the patients were allocated to either adjuvant systemic chemotherapy, defined as chemotherapy without targeted agents starting within 3 months postoperatively, or active surveillance.

He pointed out that, as they excluded postoperative morbidity as a variable, there is a risk of selection bias. In addition, the inclusion of systemic chemotherapy after 3 months postoperatively in the active surveillance group could introduce an allocation bias.

After performing numerous analyses to account for the potential selection and allocation biases, the difference between the two groups remained significant, at a hazard ratio for death with adjuvant chemotherapy vs active surveillance of 0.70 (P = .03).

Further sensitivity analysis to account for unmeasured confounding by major postoperative morbidity had only a marginal effect on the results.

Despite the need for randomized trials to confirm their results, he believes they “may be used for clinical decision-making in this increasing, understudied patient group for whom no data are available and no randomized trials are ongoing.”

She said the program is organized around a highly specialized surgical unit, with weekly multidisciplinary tumor board meetings, defined clinical pathways and practice protocols, and a dedicated prospective database.

She presented findings on 523 patients who have been treated since the program launched in 2006. Just over half of the patients were female (53.4%), and the average age was 59 years.

Neoadjuvant chemotherapy was administered to 95% of patients, and complete cytoreduction (CC0) was achieved in 94%. Grade 3/4 postoperative complications were seen in 21%, and the mortality rate was 0.4%.

Over a median follow-up of 27.5 months, the median overall survival was 42.8%, at a cumulative probability of 5-year survival of 37%.

“The delivery of care within a highly specialized multidisciplinary unit is associated with a very high complete resection rate and very low postoperative morbidity and mortality,” she added.

Bertagnolli commented that the study “demonstrates the value of a specialty center approach,” adding that their use of weekly meetings, defined clinical pathways and practice protocol, and a prospective database means their results “can be understood and compared to that of other centers.”

CAIRO6 is a joint initiative of the Dutch Peritoneal Oncology Group and Dutch Colorectal Cancer Group, and funded by the Dutch Cancer Society. No other funding was declared. Bertagnolli, Rovers, Bakkers, and Ramos Bernadó have disclosed no relevant financial relationships.