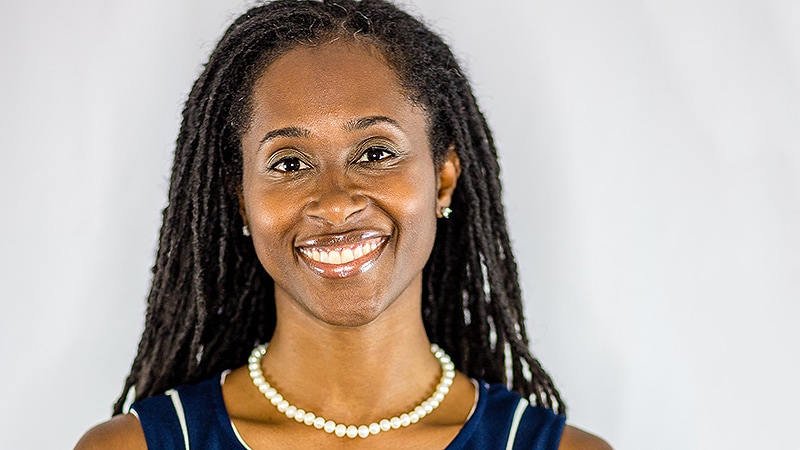 I didn’t have any doctors in my family. The only doctor I knew was my pediatrician. At 6 years old — and this gives you a glimpse into my personality — I told my parents I did not think he was a good doctor. I said, “When I grow up to be a doctor, I’m going to be a better doctor than him.” Fast forward to 7th grade, when I saw an orthopedic surgeon for my scoliosis. He was phenomenal. He listened. He explained to me all of the science and medicine and his rationale for decisions. I thought, “That is the kind of doctor I want to be.”

I went to medical school at Penn and didn’t think psychiatry was a medical specialty. I thought it was just Freud and laying on couches. I thought, “Where’s the science, where’s the physiology, where’s the genetics?” I was headed toward surgery.

Then, I rotated with an incredible psychiatrist. I saw behavior was biological, chemical, electrical, and physiological. I realize, looking back, that I had an interest because there is mental illness in my family. And there is so much stigma against psychiatric illnesses and addiction. It’s shocking how badly our patients get treated in the general medicine construct. So, I thought, “This field has science, the human body, activism, and marginalized patients? This is for me!”

I went to Howard University, which was the most freeing time of my life. There was no code-switching, no working hard to be a “presentable” Black person. When I started interviewing for medical schools, I was told by someone I interviewed with at one school that I should straighten my hair if I wanted to get accepted. I marked that school off my list. I decided right then that I would rather not go to medical school than straighten my hair to get into medical school. I went to Penn; they accepted me without my hair straight.

Penn Med was majorly White. There were six of us who were Black in a class of about 150 people. There was this feeling like “we let you in” even though every single one of us who was there was clearly at the top of the game to have been able to get there. I loved Penn Med. My class was amazing. I became the first Black president of medical student government there and I won a lot of awards.

When I was finishing up, my dean at the time, who was a White woman, said, “I’m so proud of you. You came in a piece of coal and look how we shined you up. “What do you say? I have a smart mouth, so I said, “I was already shiny when I got here.” She said, “See that’s part of your problem, you don’t know how to take a compliment.” That was 2002, and I still remember every word of that conversation.

I was on the psychiatry unit rounding as a medical student and introduced myself to a patient. He said, “What’s your name?” And I thought, here it comes. I said, “Nzinga Ajabu,” my name at the time. He said “Nzinga? You probably have a spear in your closet.” When I tell these stories to White people, they’re always shocked. When I tell these stories to Black people, they say, “Yeah, that sounds about right.”

You can talk to Black medical students, Black interns, Black residents. When patients say something racist to you, nobody speaks up for you, nobody. It should be the attending that professionally approaches the patient and says something, anything. But they just laugh uncomfortably, they let it pass, they pretend they didn’t hear it. Meanwhile, you are fuming, and injured, and have to maintain your professionalism. It happens all the time. When people say, “Oh, you don’t look like a doctor,” I know what that means, but someone else may not even notice it’s an insult. When they do notice an insult, they don’t have the language or the courage to address it. And it’s not always a patient leveling racial insults. It very often is the attending, the fellow, the resident, or another medical student.

These things happen to me less now because I’m in a position of power. I’d say most insults that come my way now are overwhelmingly unintentional. I call people out on it 95% of the time. The other 5% of the time, I’m either exhausted, or I’m in some power structure where I decide it’s too risky. And those are the days — when I decide it’s too risky for me to speak up — when I come home exhausted. Because there will always be a power dynamic, as long as I’m alive, where you can’t speak up because you’re a Black woman, and that just wears me out.

A bias people have is that when you talk about Black people, they think you are talking about poor people. When we talk about police brutality, or being pulled over by the police, or dying in childbirth, our colleagues don’t think that’s happening to us. They think that’s happening to “those” Black people. Regardless of my socioeconomic status, I still have a higher chance of dying in childbirth or dying from COVID.

COVID had already turned my work up to 100 — we had staff losing loved ones and coming down with fevers themselves. And I had just launched my podcast. Then they killed Breonna Taylor, Ahmaud Arbery, Amy Cooper called the cops on Christian Cooper, and they killed George Floyd. This is how it happens. Bam. Bam. Bam.

The series of killings turned up my work at Physicians for Criminal Justice Reform, but it also turned up my work as a mother. My boys are 13 and 14. I personally can’t watch some of the videos because I see my own sons. I was already tired. Now I’m exhausted, I’m furious and I’m desperate to protect my kids. They have this on their backs already. Both of them have already had to deal with overt racism — they’ve had this burden since they were 5 years old, if not younger. I have to teach them to fight this war. Should that be how it is?

Nzinga Harrison, MD, 43, is a psychiatrist and the cofounder and chief medical officer of Eleanor Health, a network of physician clinics that treats people affected by addiction in North Carolina and New Jersey. She is also a cofounder of Physicians for Criminal Justice Reform, Inc. and host of the new podcast In Recovery. Harrison was raised in Indianapolis, went to college at Howard University and received her MD from the Perelman School of Medicine at the University of Pennsylvania in 2002. Her mother was an elementary school teacher. Her father, an electrical engineer, was commander of the local Black Panther Militia. Both supported her love of math and science and brought her with them to picket lines and marches.

Usha Lee McFarling is an American science reporter who has written for the Los Angeles Times, Boston Globe, STAT News, and the Knight Ridder Washington Bureau. In 2007 she won a Pulitzer Prize for Explanatory Reporting. Follow her on  Twitter @ushamcfarling.