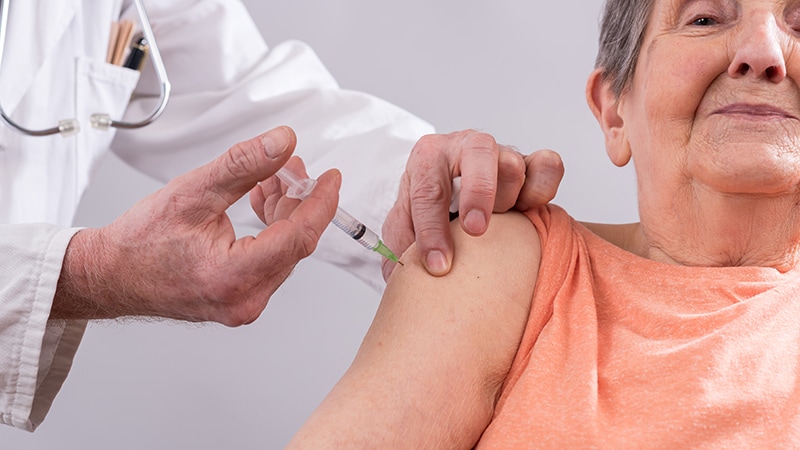 The number of Americans aged 60 years and older who report receiving shingles vaccination had risen steadily since 2008 and has leveled off during the past few years, new data from the Centers for Disease Control and Prevention’s (CDC’s) National Center for Health Statistics reveal.

“The take-home message of our report is that among adults aged 60 and over, shingles vaccination has increased since 2008. However, disparities in receipt of this vaccination still remain,” Emily Terlizzi, MPH, told Medscape Medical News.

The report was published online July 9 in NCHS Data Brief.

Similar Rates for Men and Women

Rates of people who reported receiving at least one vaccination with Zostavax (Merck) or Shingrix (GlaxoSmithKline) varied by factors that included Hispanic origin, education, and family income. An unexpected finding was that rates did not vary significantly between men and women.

“One finding that I would say surprised me was that, although the percentage who had ever received a shingles vaccine among women aged 60 and over was higher than that among men in this age group, this difference was not statistically significant,” said Terlizzi, a health statistician in the Data Analysis and Quality Assurance Branch, Division of Health Interview Statistics, the CDC National Center for Health Statistics, in Hyattsville, Maryland.

The similarity of rates was less of a surprise to Len Horovitz, MD, a pulmonary specialist at Lenox Hill Hospital in New York City, who was not affiliated with the report. “In my anecdotal experience, I don’t see a preponderance of one sex getting shingles more than another. It’s pretty evenly distributed,” he told Medscape Medical News.

Terlizzi and co-author Lindsey I. Black, MPH, say their findings align with prior research. However, they note, “Our report uses more recent data from a large, nationally representative data source to update these estimates and describe these disparities.” Data come from results of the annual National Health Interview Survey of households nationwide.

“The health disparity with regard to lower vaccination rates in Hispanic and non-Hispanic Black populations is reported with other vaccines as well and points to the need for better efforts to vaccinate Hispanic and non-Hispanic Black populations,” added Schmader, a professor of medicine at Duke University School of Medicine in Durham, North Carolina.

On a positive note, “It was good to see increasing use of shingles vaccination over time, given how devastating zoster can be in older adults and the fact that the vaccines are effective,” said Schmader, who also serves on the working groups for the Herpes Zoster, Influenza and General Adult Immunization Guidelines for the CDC Advisory Committee on Immunization Practices (ACIP).

Self-reports of receiving vaccination increased in association with higher education and family income levels. For example, 39.9% of respondents who had more than a high school diploma or GED (General Educational Development) reported receiving the shingles vaccine. In contrast, only 21.2% of people with lower educational attainment reported receiving a vaccine.

In terms of income, 20.4% of poor adults reported being vaccinated, compared with 38.4% of adults who were not poor.

The investigators also evaluated the data by geographic region. They found that rates of vaccinations varied from 26.3% in the East South Central part of the United States (which includes Tennessee, Kentucky, and Alabama) to 42.8% in the West North Central region (which includes the Dakotas, Minnesota, and Nebraska).

For most of the decade evaluated in the study, ACIP recommended vaccination against shingles for Americans aged 60 years and older. The current findings, therefore, do not account for ACIP’s expanding its recommendations in 2017 to include adults aged 50 years and older.

Zostavax is expected to be discontinued this year. It was the only shingles vaccine available before the approval of Shingrix in 2018. The shift to a single product could alter vaccination patterns further.

Terlizzi plans to continue monitoring trends to “see what changes occur in the next few years,” she said.

Data on vaccination rates for shingles are important, given the large proportion of the population at risk, Horovitz said. “People over age 50 who have had chickenpox have a one third chance over their lifetimes to get shingles. That is a lot of people.”

“I don’t know how to dissect all that out of these data,” he added.

Compliance with recommendations also contributes to vaccination rates, Horovitz said. The fact that in about 10% of people, a flulike syndrome develops the day after being vaccinated with Shingrix can cause some to postpone or rethink immunization, he added. In addition, Shingrix requires two shots. “People have to come back, and that always sets up an issue with recalling someone.”

Marketplace shortages of the Shingrix vaccine could also contribute to lower vaccination rates. However, Horovitz said that in his practice, availability was only a problem during the first year after approval in 2017.

On a related note, manufacturer GlaxoSmithKline announced that a decrease in vaccination demand during the COVID-19 pandemic has allowed the supply to catch up. Shingrix no longer qualifies for the CDC’s shortages list, according to a July 9 report.

Terlizzi, Horovitz, and Schmader have disclosed no relevant financial relationships.