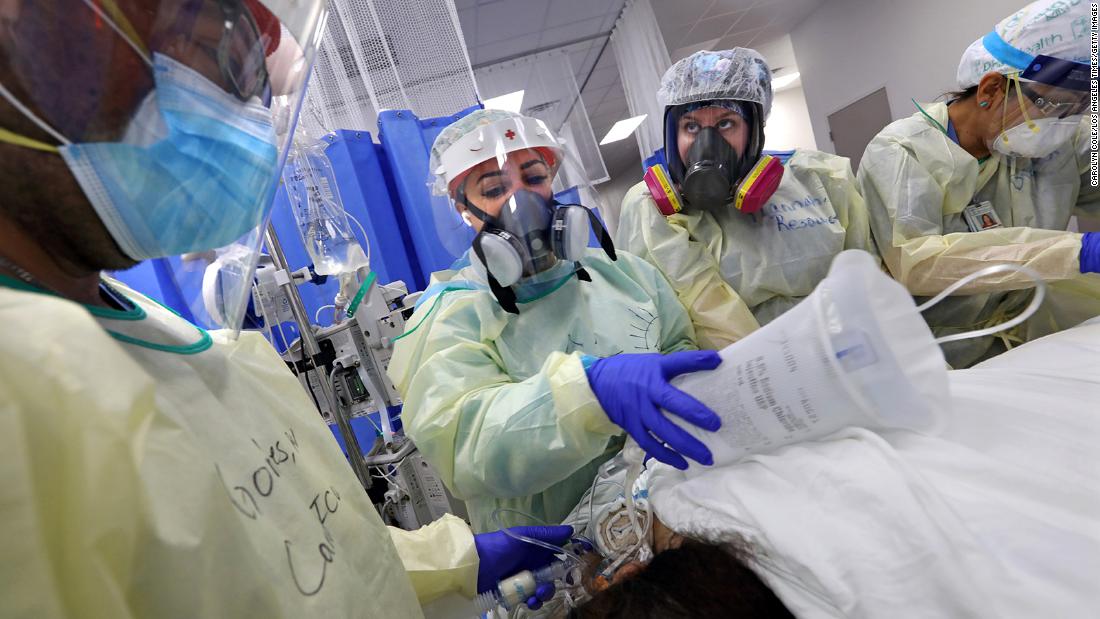 Health, Fitness & Food
Share on Facebook
Share on Twitter
Share on Pinterest
Share on LinkedIn
The country’s rising daily rate of confirmed coronavirus cases, along with a near-record number of hospitalizations, signals the US is far from containing a virus that is straining hospitals and labs, health experts say.
“We’ve rolled back essentially two months’ worth of progress with what we’re seeing in number of cases … in the United States,” Dr. Ali Khan, dean of the University of Nebraska Medical Center’s College of Public Health, told CNN on Thursday.
About 59,600 people were hospitalized with Covid-19 in the US on Wednesday — roughly 300 short of the country’s peak recorded in mid-April, according to the Covid Tracking Project.
The US has officially recorded 3.99 million cases, according to Johns Hopkins University. The reported count is picking up speed: The national seven-day average of new daily cases was 67,429 on Wednesday, a record.
It took the country nearly 100 days to count its first 1 million cases, from January 21 to April 28. It took only 15 days to rise from 3 million on July 8 to 3.99 million, according to JHU figures.
Many Covid-19 illnesses went undiagnosed, especially early in the pandemic when testing was less available. The Centers for Disease Control and Prevention has said true case totals are probably more than 10 times greater than official figures in most places. One study suggested the US might have had more than 8 million cases in March alone.
But physicians are sounding alarms about rising hospitalizations nationwide, and especially in the nation’s hot spots like parts of Florida.
More than 50 hospitals there have reached capacity in their intensive care units, and only 15% of the state’s ICU beds are available, the Agency for Health Care Administration said.
“Any spike in cases or increase in hospitalizations is going to put our ER system and hospital systems in peril,” Dr. Damian Caraballo, an emergency room physician in Tampa, told CNN.
The spread has promised a bleak outlook for the months ahead, according to both health officials and President Trump.
What comes next is unclear: With now at least 41 states requiring face coverings, some have said strict measures like limiting gatherings and enforcing social distancing and masks can be as impactful as another lockdown. But others aren’t as hopeful.
“Masks will help, but I think we need a lot more than masks to contain this epidemic that’s running through our country like a freight train,” William Haseltine, the chair and president of global health think tank ACCESS Health International, said.
“Until we see major changes of behavior and until we see the public health services here stepping forward with many more resources, we aren’t sure of containing this.”
Track the virus

White House coronavirus task force coordinator Dr. Deborah Birx, meanwhile, has privately told a group of state and local health officials about a concerning rise in coronavirus cases in 12 cities.
“There are cities that are lagging behind, and we have new increases in Miami, New Orleans, Las Vegas, San Jose, St. Louis, Indianapolis, Minneapolis, Cleveland, Nashville, Pittsburgh, Columbus and Baltimore, so we’re tracking this very closely,” she said Wednesday, according to audio obtained by journalism nonprofit Center for Public Integrity.
“We’re working with the state officials to make sure we’re responding together, but when you first see that increased test positivity, that is when to start the mitigation efforts,” she said in the call.
Separately, Birx said publicly that a surge in new cases across the South and Southwest has been linked to Americans’ travel around Memorial Day and reopenings.
“This epidemic all appeared across the South and the West after June 10 simultaneously,” she told Fox News. “We saw wide virus spread across counties, across rural areas, across small metros and big metros, all the way across the South, Southwest and West, almost simultaneously.
Some US leaders have admitted parts of the country reopened their economies too soon. And as they did, residents were too quick to jump back to old habits: crowding bars, packing beaches on hot summer days, holding barbecues and spending holidays with friends.
Hoping to stem the spread, at least 27 states have hit a pause or rolled back their reopening plans. In Houston on Wednesday, Mayor Sylvester Turner spoke again in favor of a second stay-at-home order. In Los Angeles, the mayor said the city was on the “brink” of another lockdown.
Coronavirus: Your questions, answered

Louisiana, where the governor said earlier this month that progress made in June against the virus was wiped out in weeks, on Thursday joined 11 other states that have reported a total of more than 100,000 infections.
Louisiana reached 101,650 cases, the state’s health department said. The other states are California (with the most cases in the nation), New York, Florida, Texas, New Jersey, Illinois, Georgia, Arizona, Massachusetts, Pennsylvania and North Carolina.
Texas broke its record for hospitalizations two days in a row this week, with 10,848 patients reported Tuesday and 10,893 reported Wednesday. It also reported its highest single-day number of deaths: 197.
Florida reported its highest one-day death tally on Thursday: 173.
Florida has been sending nurses to hospitals that need more staff. More than 50 hospitals have asked for a total of 2,400 extra nurses, and more than 1,000 have so far been sent, the state has said.
Miami has announced heightened punishments for people who don’t follow its mandate to wear masks in public. Warnings have been eliminated, and the first and second offenses are now punishable by $100 fines. The third could lead to an arrest, the city said Wednesday.
On Wednesday, Gov. Ron DeSantis said parents should have the option of sending their children back to the classroom or having them learn digitally from home, adding the “costs of keeping schools closed are enormous.”
A 9-year-old is the youngest to die of Covid-19 in Florida, officials say

California surpassed New York for the most cases in the nation this week. With more than 420,000 cases, the state has seen a recent surge whereas New York’s reported infections have slowed significantly. California reached another peak in new cases, reporting 12,807 positive tests in a day, Gov. Gavin Newsom said Wednesday.
Los Angeles County health officials announced that the virus is on track to be the second leading cause of death in the county — with at least 3,400 fatalities in the first six months of the year.
That would mean the disease will claim more lives than Alzheimer’s disease and strokes, health officials said. Coronary heart disease, the leading cause of death, claimed 6,000 lives in the first six months of 2019.
The news comes after the county reported 2,232 hospitalized patients Monday, breaking its own record of daily hospitalizations at least four times in a week. There were 2,207 confirmed cases hospitalized Wednesday, 27% of whom are in the ICU, health officials said.
Meanwhile, San Francisco is on “high alert” after averaging 79 new cases every day this week and seeing a 23% increase in hospitalizations, Public Health Director Grant Colfax said Wednesday.
Those two numbers play key roles in helping officials determine whether to pause or roll back reopening, Colfax added.