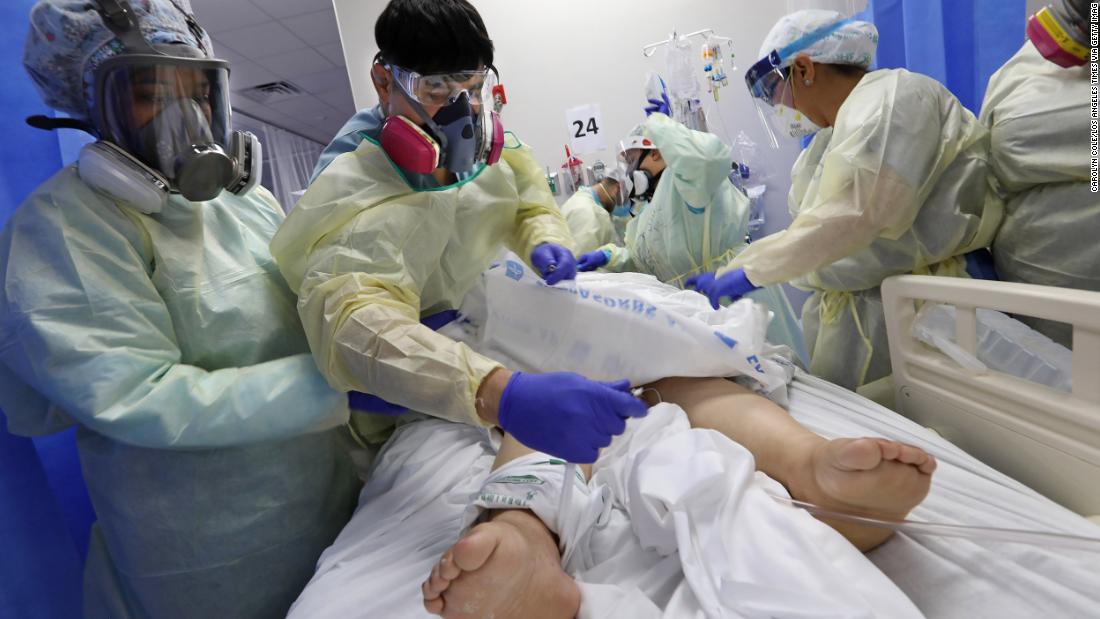 Health, Fitness & Food
Share on Facebook
Share on Twitter
Share on Pinterest
Share on LinkedIn
When asked why Europe appears to have been more effective at controlling the spread of the virus, the nation’s top infectious disease expert said that it might have helped that about 95% of Europe had shut down much earlier.
“When you actually look at what we did — even though we shut down, even though it created a great deal of difficulty — we really functionally shut down only about 50% in the sense of the totality of the country,” Fauci, director of the National Institute of Allergy and Infectious Disease, said in response to a question from Rep. Jim Clyburn of South Carolina.
Some states also followed reopening guidelines more closely than others, Fauci added, saying, “There are some states that did it very well and some states that did not.”
“I think there was such a diversity of response in this country from different states that we really did not have a unified bringing everything down,” he added later, in response to a similar question from Rep. Jamie Raskin of Maryland.
The US is seeing a resurgence of coronavirus infections, and on Friday the number of cases surpassed 4.5 million, according to data from Johns Hopkins University. More than 152,870 people have died.
The US Centers for Disease Control and Prevention on Friday published its ensemble forecast, which projected 173,270 coronavirus deaths in the US by August 22, with a range between 167,692 to 182,366 deaths.
Additionally, the Institute for Health Metrics and Evaluation increased its forecast to 219,864 total deaths by November, in part because the nation continues to debate measures like wearing masks and social distancing.
“The thing we need to do is we need to pull out all the stops to get it down to baseline and to keep it there by doing the things that we’ve been talking about — that I’ve been talking about — consistently,” Fauci said Thursday night during CNN’s coronavirus townhall.
“If we do that,” he added, “then I think we will be well toward seeing this under control. If we don’t, then we can’t make a prediction about how long this will last.”

Meantime, the race is on for a vaccine to protect against coronavirus, and though some early data looks promising there are still questions around vaccines in development.
Operation Warp Speed, the federal government’s multi-billion dollar Covid-19 vaccine program, has provided funding for two potential vaccines that have quickly made their way to advanced human trial phases.
The head of the operation, Moncef Slaoui, said Thursday he wouldn’t be surprised if a vaccine turned out to be 90% effective against the virus.
On Friday, Fauci reiterated that he believed a vaccine could be available by the end of the year.
“I believe it will occur,” Fauci told Rep. Carolyn Maloney of New York, adding he was “cautiously optimistic” based on data from trials in animals and humans that “we will have a vaccine by the end of this year and as we go into 2021.”
“I don’t think it’s dreaming, Congresswoman,” Fauci said. “I believe it is the reality.”
Additionally, Fauci said that 30,000 people have already started to enroll for the Phase 3 trial of a vaccine in development by his agency and Moderna. As of Thursday night, more than 250,000 people had registered interest in trials for a coronavirus vaccine, Fauci said.
“I just want to use my last couple of seconds to urge anyone who’s listening who wants to participate to please go to that website and register so that you can be part of the solution of this terrible scourge,” Fauci said.
But people will need to get the vaccine in order for it to protect them, and even those who aren’t deterred by existing conspiracy theories around vaccines could be scared off even by the project’s name, Bill Gates said Thursday.
“We certainly need people to be rational about vaccines. They eradicated smallpox, they saved millions and millions of lives,” he said. “They are very complex to design, and that’s why, you know, saying it’s being done at Warp Speed is a little scary, because you really need to do the safety checks very, very carefully,” said the founder of Microsoft and co-chair of the Bill and Melinda Gates Foundation.
Gates said the public should take comfort that the nonpolitical staff at the Food and Drug Administration are holding the line to ensure the rapidly developing drugs are effective and safe.

Plans put into action as first day of school nears

As the start of the school year grows closer, officials are tasked with balancing public concern over children’s safety with the impact virtual learning could have on their education and welfare.
In New York City, students will return to school with safety protocols for cleaning, contact tracing and distancing, Mayor Bill de Blasio announced Thursday.
“We are doing everything in our power to keep kids healthy while ensuring they are getting the education they deserve. These rigorous test and trace protocols will keep our students and staff safe as we start off this new school year,” de Blasio said.
Philadelphia originally was going to return to a school year that combined virtual and in-person learning, but after backlash the Board of Education voted to provide all remote learning until at least November, with Superintendent Dr. William Hite promising that the change will not remove the emphasis on student achievement.
On Friday, the Salt Lake City Board of Education in Utah voted to begin the school year remotely, and push the start date back two weeks, to September 8. The extra time will be used to distribute devices to students and allow teachers to establish personal connections with them and their families, the district said.
Districts in Florida are still weighing their options, but Gov. Ron DeSantis is advocating for a model based on parents’ choice.
“Parents who prefer distance learning should be able to opt for it, and parents who desire in person instruction should have access to it,” the governor said.
Elsewhere, recent cases at schools and camps demonstrate the risks of returning to class in-person.
One student tested positive for Covid-19 on Thursday after attending the first day of school in an Indiana school district, according to a letter sent to parents that evening.
The superintendent of the Greenfield-Central Community School Corporation informed parents that the junior high school student was immediately isolated and parents whose children had close contact with the student were notified.
Meanwhile, the CDC warned that an outbreak at a Georgia camp in mid-June was a warning of what could happen as schools reopen. Five days after the start of orientation, a teenage staffer fell ill and tested positive the next day, per the study published in the CDC’s Morbidity and Mortality Weekly Report.
In all, at least 44% — or 260 of the 597 attendees — were infected by the coronavirus, though the rate could be even higher as test results were only available for 344 attendees.
The camp had followed some but not all of the CDC’s guidance, the report said. The camp only required staff members to wear masks, but not the campers. Attendees also engaged in “daily vigorous singing and cheering,” which could have contributed to transmission.
Wearing masks, social distancing and hand washing were all recommended for school reopenings, the report said, and “are critical to prevent transmission of the virus in settings involving children and are our greatest tools to prevent Covid-19.”