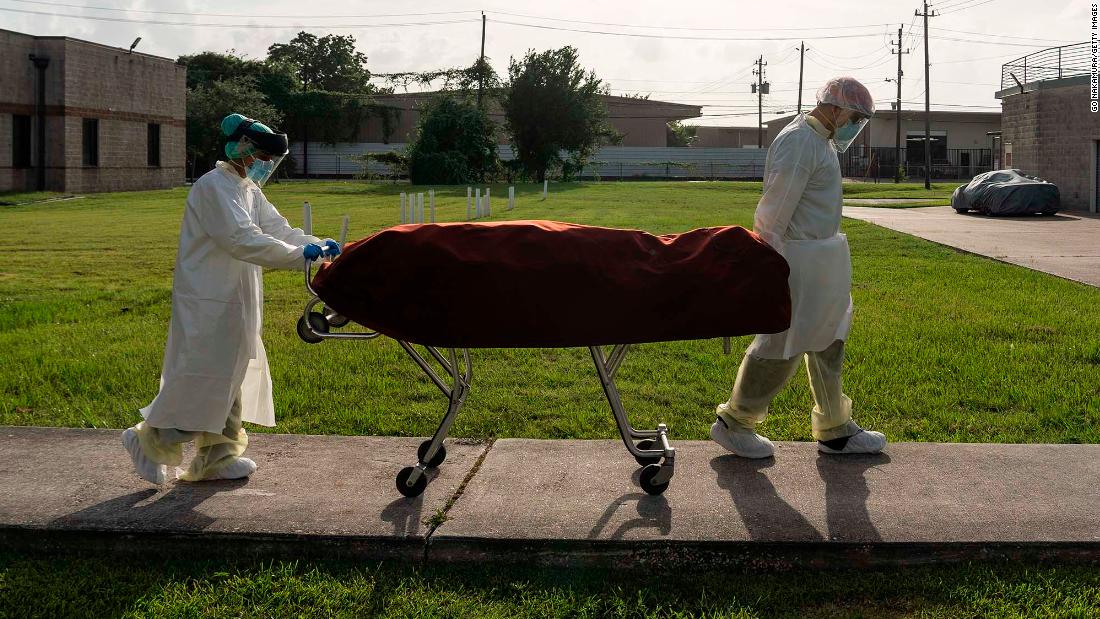 Health, Fitness & Food
Share on Facebook
Share on Twitter
Share on Pinterest
Share on LinkedIn
The US coronavirus outbreak hit nearly 3.5 million total infections Thursday afternoon and more than 137,000 reported deaths, according to a tally by Johns Hopkins University.
Thirty-nine states reported an increase in the number of new cases from the week before. California, Florida, Arizona and Texas have become the states to watch as surging coronavirus cases lead to a shortage of hospital beds.
In Arizona’s Maricopa County, which has the most Covid-19 cases in the state, the medical examiner’s office has ordered four portable coolers with additional ones expected in the coming days, said Fields Moseley, the county spokesman. The medical examiner’s office morgue had a total of 156 deceased people — with a surge capacity of just over 200, Moseley said Wednesday.
It is unclear how many of the deaths are related to the coronavirus — the county has said fatalities go up in the summer due to the heat.
In Texas, the city of San Antonio and Bexar County have secured several refrigerated trailers to store bodies until they can be released to funeral homes, Mario Martinez, Metro Health Assistant Director, said in a video interview released by the city.
He said that they currently have two in operation and another three will be operational by the end of the week.
Cameron and Hidalgo counties in Texas are sharing a large refrigerated trailer to store bodies of coronavirus patients because of a lack of space at the morgues.
“I’m pleading with everybody in our neck of the woods, help us do your part, people’s lives are at stake — not just the people getting sick, but doctors, nurses working to the bone, EMS personnel, transporting people,” Cameron County Judge Eddie Treviño Jr. told CNN affiliate KVEO.
The Dallas County morgue had to use an external refrigerated truck this week due to the increased caseload, the Medical Examiner’s Office told CNN.
“We have had to go to the external refrigerated truck once this week due to increased caseload, but today we are back with all cases inside,” Dr. Jeffrey Barnard, the Dallas County Medical Examiner, said in a statement. “I anticipate that we will at some point have to use the truck again based on continuing increased volume.”

Three more major retailers announced on Thursday they’ll require customers to wear masks in their stores.
Publix will require masks as of July 21 and CVS starting on July 20. Target will require customers to wear masks as of August 1, though the retailer noted 80% of its stores already require masks because of state and local regulations.
On Wednesday, retail giant Walmart announced it would require masks in its stores.
Colorado Gov. Jared Polis announced on Thursday that face masks are required in public places when social distancing is impossible. The order takes effect at midnight on Thursday.
Arkansas Gov. Asa Hutchinson announced a statewide order effective Monday. Masks will be required when people are in the presence of non-household members and aren’t able to socially distance.
Alabama and Montana issued statewide facial covering orders on Wednesday.
On Thursday, Tulsa Mayor G.T. Bynum signed a city mask ordinance while wearing a mask himself, according to a post on his Facebook page.
Oklahoma Gov. Kevin Stitt said Wednesday he’s tested positive for Covid-19, the same day the state reported a record high number of new cases.
Despite his diagnosis, Stitt said he opposes a statewide face mask law, partly because it would be difficult to enforce, according to the Oklahoman newspaper.

Gov. Brian Kemp extended Georgia’s emergency coronavirus restrictions and said while people are “strongly encouraged” to wear face coverings — they’re not required. The order, which expires July 31, limits public gatherings to 50 people and mandates social distancing.
His order also prevents local governments from implementing stricter rules than the state’s — including requiring face masks.
But on Thursday, Michael Smith, press secretary for Atlanta Mayor Keisha Lance Bottoms, told CNN the “Mayor’s Order remains in effect, as science and data will continue to drive the City’s decisions. Masks save lives.”
The state reported 417 additional hospitalizations, nearly double Tuesday’s total, and is turning the Georgia World Congress Center, a large convention venue in downtown Atlanta, into a potential overflow hospital.
California, the country’s most populous state, reported 8,544 new cases of the coronavirus and 118 additional deaths on Thursday, according to updated data from the California Department of Public Health. The new cases represent a 2.5% increase and the deaths reflect a 1.6% increase from Wednesday’s data. And in Los Angeles County, the public health director warned another stay-at-home order is likely.
“We can’t take anything off the table — there’s absolutely no certainty of what exactly is going to happen next,” Dr. Barbara Ferrer said.
Florida reported more than 315,000 positive cases statewide on Thursday, an increase of 13,965 cases from the previous day, according to the Florida Department of Health. There were a record 156 coronavirus-related deaths on Thursday, a jump from the previous high of 132 on Tuesday.
More than 50 hospitals have reached ICU capacity and show zero beds available, according to data released by the Agency for Health Care Administration (AHCA). Eight of those hospitals are in Miami-Dade County. Miami Mayor Francis Suarez said hospitals in the city have hit 95% capacity.

To combat the rise in coronavirus cases in California, there needs to be enough contact tracing staff in regions where Covid-19 infections are increasing, the principal investigator for the state’s contact tracing program told CNN, but not all regions require an equal number of tracers.
“They’re not, in their current level, they’re not in all places,” said University of California, San Francisco epidemiologist Dr. George Rutherford, who also leads the university’s contact tracing training program. “If we spread it evenly there still probably wouldn’t be enough in the highest incidence areas.”
Health officials, he said, cannot forecast how much contact tracing is needed in a region until public health departments are alerted to positive results, but the teams are scalable. “We can call in extra people if there’s a surge,” Rutherford said.

Thousands more Americans will die from the virus before a vaccine is developed, an influential model predicts.
The model from the Institute for Health Metrics and Evaluation at the University of Washington is projecting 224,000 people will die from the virus by November 1 — an increase of almost 16,000 from the week before.
That jump is due to skyrocketing cases around the country, particularly in Florida, Texas, Arizona, California, Louisiana, Kentucky, Mississippi, Nevada, New Mexico, South Carolina, Tennessee and Utah, said Dr. Chris Murray, chair of the IHME.