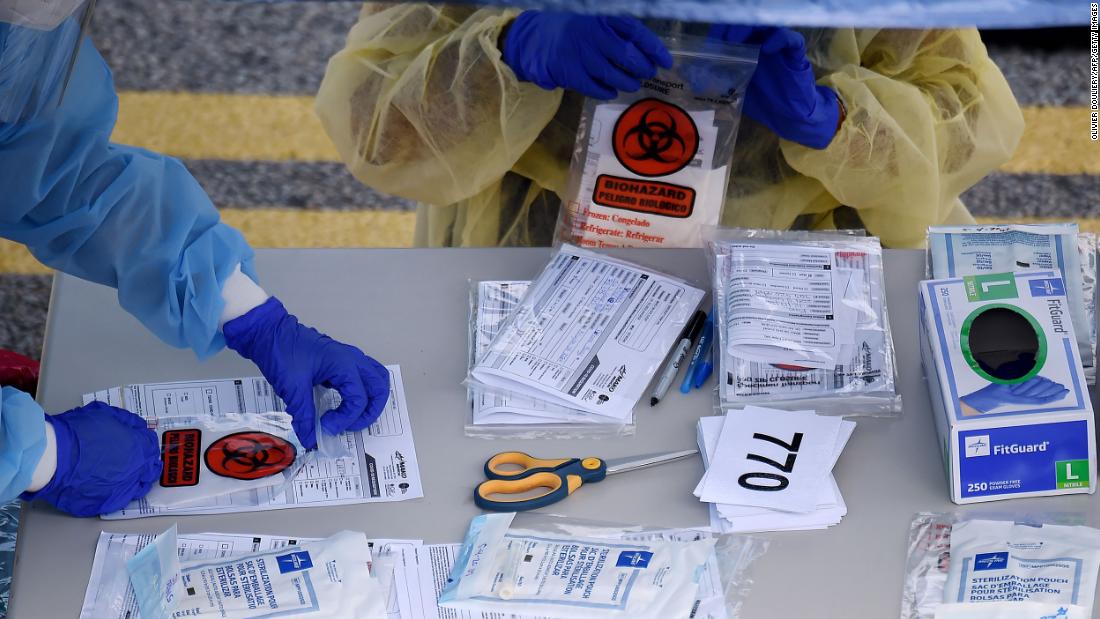 Health, Fitness & Food
Share on Facebook
Share on Twitter
Share on Pinterest
Share on LinkedIn
Researchers from the Yale School of Public Health created the SalivaDirect test, which received emergency use authorization from the Food and Drug Administration on Saturday.
“The SalivaDirect test for rapid detection of SARS-CoV-2 [the novel coronavirus] is yet another testing innovation game changer that will reduce the demand for scarce testing resources,” said Adm. Brett Giroir, the US official in charge of Covid-19 testing efforts.
Unlike some other tests that require specialized supplies, the SalivaDirect test doesn’t require a specific swab or collection device. It can also be used with reagents from multiple vendors.
“We simplified the test so that it only costs a couple of dollars for reagents, and we expect that labs will only charge about $10 per sample,” said Nathan Grubaugh, a Yale assistant professor of epidemiology.
“If cheap alternatives like SalivaDirect can be implemented across the country, we may finally get a handle on this pandemic, even before a vaccine.”
Researchers said the new test can produce results in less than three hours, and the accuracy is on par with results from traditional nasal swabbing. They said SalivaDirect tests could become publicly available in the coming weeks.
Yale plans to publish its protocol as “open-source,” meaning designated labs could follow the protocol to perform their own tests according to Yale’s instructions, the FDA said.
The NBA was among the groups that funded research for the test and currently uses the method to test for nonsymptomatic carriers of the virus.

Testing declines in many states

The SalivaDirect news comes at a critical time, as 17 states are performing fewer tests this past week compared with the previous week, according to the Covid Tracking Project.
Some Americans still have to wait days to receive their testing results. Now groups like the American Medical Association are asking the federal government for priority guidelines to help fast-track those who need their tests and results urgently.
While testing has gone down in 17 states, test positivity rates have increased in 34 states, according to the Covid Tracking Project. That means a higher percentage of tests being performed are turning out to be positive.
So while daily Covid-19 case counts are decreasing in parts of the US, some of those decreases are likely because of decreases in testing, said Dr. Ashish Jha, director of the Harvard Global Health Institute.
“Testing has also fallen by about 20% to 30%, and so the picture is a little bit muddy,” he said.
What’s clearer is America’s disturbing trend of topping 1,000 Covid-19 deaths a day.
Through Saturday, the US has suffered more than 1,000 new deaths a day for 16 of the past 20 days, according to data from Johns Hopkins University and the Covid Tracking Project.
Jha said he’s hopeful the rate of deaths will go down.
“But even if it comes down to 800 deaths a day, that’s 24,000 Americans dying every month,” he said.
Track the virus in your state and across the US

College students head back to campuses

Thousands of K-12 students have had to quarantine in recent days because of the coronavirus at their schools. The US Centers for Disease Control and Prevention said Covid-19 cases in children have been “steadily increasing” from March to July.
Now, college students are also facing new challenges as they return to classes during a pandemic.
Some universities that are resuming in-person learning are using temperature checks, testing, mandatory quarantines or plexiglass dividers to try to maximize safety.
Why temperature checks won’t catch many people with Covid-19
Some experts worry it might not be enough to control the virus, which has infected more than 5.3 million Americans and killed more than 169,000.
“Are colleges safe in general to open up right now? I would say probably not,” said Dr. James Phillips, a physician and assistant professor at George Washington University Hospital.
Since college students have much more freedom in their daily lives than younger students, “there are so many other variables that go in that are going to make it incredibly difficult to keep the virus out of the classrooms and out of those living spaces,” Phillips said.
Some campuses have already reported new cases.
The University of North Carolina at Chapel Hill said Sunday that it had identified a fourth cluster of cases. In a statement posted to its verified Facebook account, the university said the latest cluster was at Hinton James Residence Hall.
On Saturday, it said a cluster of cases was identified in the Sigma Nu fraternity. And on Friday, the university announced clusters had been identified in the two student housing buildings: Ehringhaus Community and Granville Towers.
Oklahoma State University said at least 23 sorority members had tested positive for the virus. “Last night OSU officials learned of 23 positive Covid cases in an off-campus sorority house. The rapid antigen testing was performed at an off-campus health care facility,” a statement from the university read.
The entire sorority house is in isolation or quarantine after the confirmed cases “and will be prohibited from leaving the facility,” the university said.
At the University of Tennessee, Knoxville, Chancellor Donde Plowman reported 28 active cases — including 20 students and eight employees. More than 150 people were isolated or in quarantine last week, and most were nonresidential students and employees.
“Part of what we look at to make decisions about campus operations are our ability to isolate and quarantine residential students as well as keeping up with contact tracing,” Plowman said.
In Pennsylvania, Villanova University’s president sent a stern warning to students saying that those who don’t follow health guidelines such as washing their hands and wearing a mask at all times will “BE SENT HOME.”
“If you can’t or won’t commit to this new way of doing things, then you shouldn’t be here,” President Peter M. Donohue said. “It’s as simple as that.”