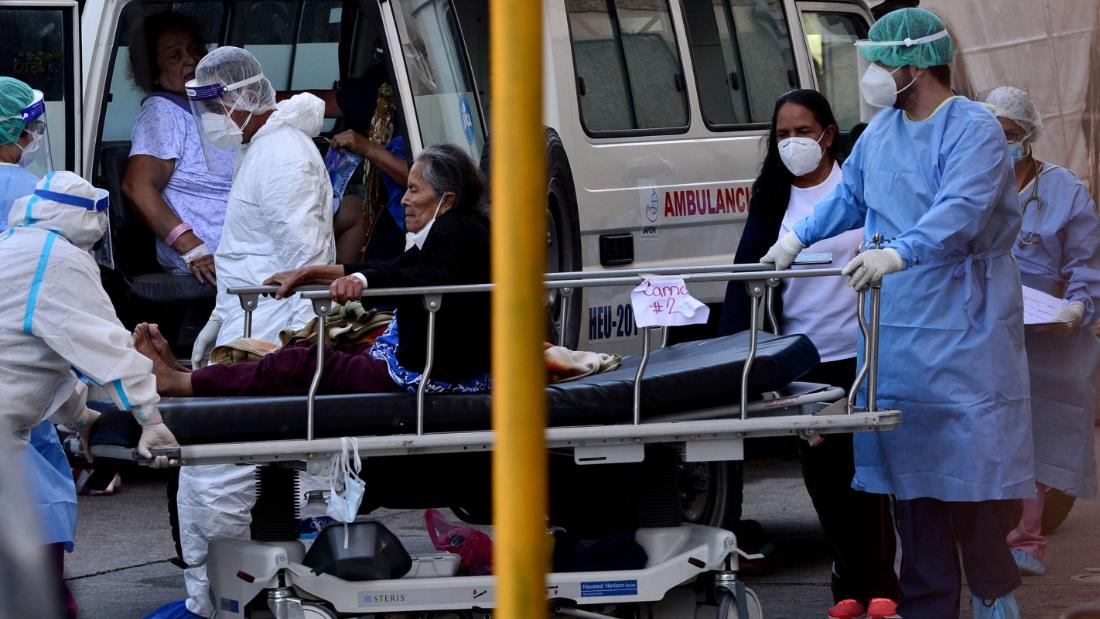 Health, Fitness & Food
Share on Facebook
Share on Twitter
Share on Pinterest
Share on LinkedIn
Almost 40,000 coronavirus cases were reported Thursday, surpassing a previous one-day high on April 24, according to Johns Hopkins University. The country is averaging more new cases per day than ever, with a seven-day average of 33,035 on Thursday, a CNN analysis of the Johns Hopkins data shows.
Overnight, Arizona and New Mexico joined Texas and eight other states in pausing their reopening plans. Texas reported an all-time high in new cases, and Houston faces a dire critical care shortage.
The developments mark a “heartbreaking situation” that demands stricter actions immediately, said Dr. Peter Hotez of Baylor College of Medicine in Houston.
“We have to save lives at this point,” he told CNN on Friday morning.
Austin Mayor Steve Adler said Covid-19 beds will be at capacity in the middle of July at this rate.
“Pausing will not make things better,” Adler told CNN on Friday. “We need to do something that’s different than that. The status quo will not protect us.”
The sudden spike in confirmed cases in recent days is no surprise, another health expert said.
“Every epidemiologist was telling, screaming as loud as we could, that three weeks after Memorial Day, we’d have a peak in the cases, and five weeks after Memorial Day we’d begin to see a peak in hospitalizations and deaths,” epidemiologist Larry Brilliant told CNN on Thursday night.
“If you let everybody out without face masks and without social distancing in the middle of a pandemic, this is what was predicted.”
And while more than 2.4 million cases have been diagnosed nationwide since the pandemic started, the number of people who have been infected is likely to be 10 times as high. Antibody tests show more than 20 million people have been infected with coronavirus, most of them without knowing it, said Dr. Robert Redfield, director of the Centers for Disease Control and Prevention.
Antibody tests examine a person’s blood for signs that the immune system responded to an infection. Federal officials have been conducting such tests nationwide to determine how many people had past undiagnosed infections.
“A good rough estimate now is 10 to 1,” Redfield said.
Between 5% and 8% of Americans have been infected with the coronavirus, with the numbers varying by region. New York, once the epicenter of the pandemic, will have a higher percentage of people with past infections than some states in the West, Redfield said.
That means 90% or more have not been infected and are susceptible to the virus, highlighting the need to act aggressively to combat rising infection rates, he said.
Some cases went unnoticed partly because testing was at first limited to people who were very ill, Redfield said. As more people get tested, he added, it’s clear a large percentage had mild symptoms or none at all.
Dr. Anthony Fauci, the nation’s top infectious disease expert, said Friday that the White House coronavirus task force is “seriously considering” pool testing and acknowledged to The Washington Post that the Trump administration’s current strategy isn’t enough.
“Pool testing” mixes several people’s virus test samples into a batch, or pool, and then tests the pooled sample once. If it comes back negative, then all people in the batch can be eliminated at once. If the result is positive, each person’s sample gets analyzed individually.
The mass screening proposal is still in the discussion stage and is not expected to be announced at the task force briefing later Friday, Fauci told CNN.

Coronavirus has killed more than 124,000 people in the United States, and confirmed cases are surging in a majority of the country.
So far, 32 states are reporting an increase in new coronavirus cases this week as compared to the prior week. Eleven of them report a 50% increase or greater. They include Montana, Idaho, Vermont, Nevada, Arizona, Texas, Florida, Georgia, Michigan, Missouri and Mississippi.
Miami began requiring masks in public at 5 p.m. Thursday, and Mayor Francis Suarez says DeSantis should do the same for the whole state.
“I would recommend it. I don’t see a downside,” Suarez told CNN on Friday, noting the state’s pandemic is “four times more intense than it was in March.”
Going without a mask in public in Miami could bring a fine of up to $500 for repeat offenders.
Of a possible stay-at-home order, Suarez said, “All options are on the table.”
Arizona Gov. Doug Ducey said at a news conference Thursday, “It’s growing, and it’s growing fast across all age groups and demographics. Anyone can get this virus, and anyone can spread this virus.”
Arizona health officials reported new cases topping 3,000 as of last week, a pace that could soon overwhelm hospital intensive care facilities, the governor said. “We expect that our numbers will be worse next week and the week following,” Ducey said.
In Texas, Gov. Greg Abbott paused any further phases to reopen as the state recorded nearly 6,000 Covid-19 cases Thursday.
“It’s pretty dire,” Hotez said.
Abbott’s moves came as his state, California and Florida — the three-most populous — set records for new coronavirus cases.
Florida Gov. Ron DeSantis also indicated his state would not be moving to relax present restrictions. So did Gov. Michelle Lujan Grisham of New Mexico, who said the state is putting further economic reopening plans on hold.
California Gov. Gavin Newsom declared a budget emergency to free up $16 billion to fight the pandemic. The state’s hospitals have seen a 32% increase in patients with coronavirus over the past two weeks, he said.
US Rep. Raul Ruiz, D-California and a doctor, says many counties reopened too quickly.
“At least in my county, Riverside County, indeed they opened the economy too early,” Ruiz said on Friday. “The counties that you’re seeing with the rate of transmission and the higher rise are the counties that opened too early.”

At the beginning of the pandemic, health experts didn’t focus on younger people because the priority was the older population and those with underlying health conditions.
With the rising numbers, some states are warning that the virus is affecting a wider range of people. More younger people testing positive is a “smoldering fire” that will hit vulnerable populations, said Erin Bromage, a CNN medical analyst and a biology professor at the University of Massachusetts Dartmouth.
Meanwhile, federal health officials updated the list of who’s most at risk of severe complications from Covid-19.
The CDC added mild obesity to a list that includes the elderly, people with lung or kidney disease, and those with diabetes. People with moderate to severe asthma are also at higher risk along with pregnant women, the CDC said. Those with cardiovascular disease, chronic kidney disease and chronic obstructive pulmonary disease are also at higher risk, the CDC’s Dr. Jay Butler said.
So are those with conditions such as sickle cell disease, poorly controlled HIV infection, bone marrow transplants or an organ transplant.
The CDC also removed the specific age threshold, saying it’s not just those over age 65 who are at increased risk for severe illness.