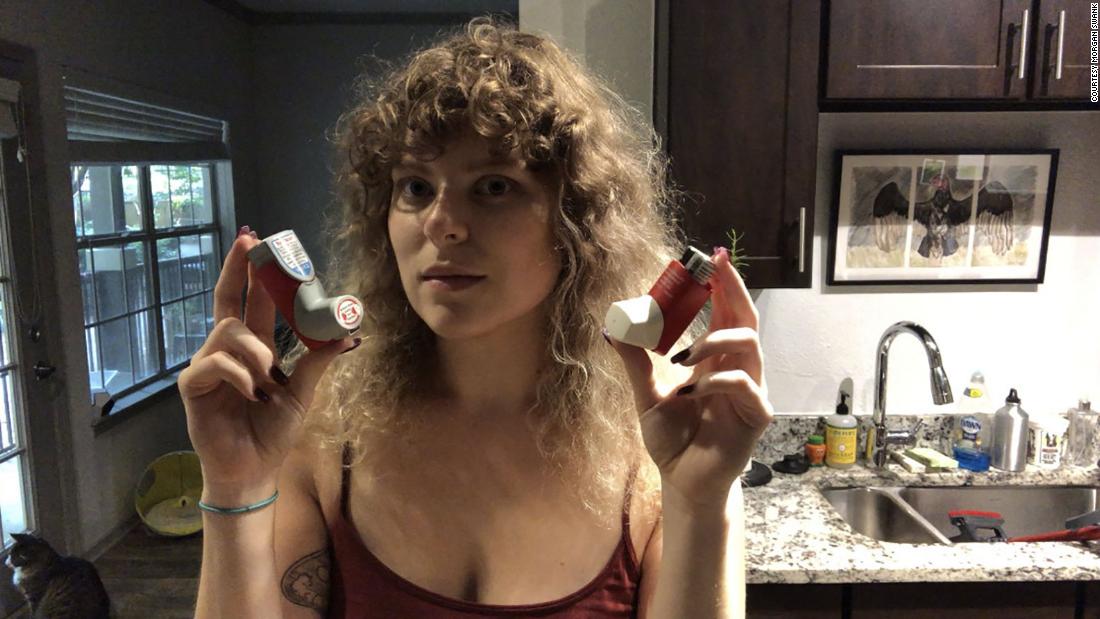 Health, Fitness & Food
Share on Facebook
Share on Twitter
Share on Pinterest
Share on LinkedIn
Three months ago, a 28-year-old environmental researcher from the United Kingdom, was on the road with friends in a band as they toured venues in the French Alps.
He came down with Covid-19 symptoms, and like many coronavirus patients, spent weeks in bed. He asked that his last name not be used in this story for professional reasons.
Unlike other people, however, Daniel’s life hasn’t returned to normal.
“Since then it’s been on and off with extreme tiredness and fatigue,” he said.
Every day he has brain fog, difficulty concentrating and problems with short-term memory that make reading, writing and speaking harder.
“Breathing has been very difficult,” he said. “I don’t feel like I have my full breath capacity. If I go for a walk for one minute, I’ll be really exhausted.”
The profound mark the disease has made on Daniel’s life isn’t uncommon.
“About 80% are going to experience a mild or asymptomatic version of Covid. It’s the other 20% that we’re worried about,” said Dr. Luis Ostrosky-Zeichner, a professor of medicine at the University of Texas McGovern Medical School.
“One out of five patients are going to get a severe form of the disease.”

Some young people are not getting better

As case counts among young people rise, Daniel and others in their 20s want to share stories of the wreckage Covid-19 has wrought in their lives.
Those patients can potentially experience permanent lung damage, including scarring and reduced lower respiratory capacity.
“The thing that we don’t yet fully appreciate is what happens when you get infected, and you get serious disease, and you recover?” said Dr. Anthony Fauci, the director of the National Institute of Allergy and Infectious Diseases, at the BIO International Convention in June.
“We don’t know the extent of full recovery or partial recovery, so there’s a lot we need to learn,” he said.
Young people, who are less likely to die from coronavirus than their grandparents, are an important target of those lessons.
Whether they contracted the virus among the snow-capped peaks of the Alps or in the heart of the outbreak in New York City’s borough of Queens, some 20-somethings are getting sick from Covid-19. And staying sick.
Their stories are a warning from millennials to millennials: Don’t play the odds with coronavirus because this disease could permanently damage your body.
“What I like to tell my students and patients is that this is a lottery you do not want to win,” said Ostrosky-Zeichner.
Read more: What we know now about Covid-19 symptoms (and what to do)

At home in the UK, Daniel is in his fourth month of Covid-19 aftermath.
He has a doctor’s note saying that he shouldn’t return to full-time work, but he picks up an occasional project when he can. There isn’t much else to do resting in bed.
The symptoms are lingering, and they’re severe.
“Two weeks ago I had a crushing sensation in my chest,” he said. “It felt like I couldn’t breathe. That was the worst part.”
Last week, while driving, he felt faint and had to pull over to the side of the road to call an ambulance to pick him up. Afraid of blacking out behind the wheel, he decided to take a break from driving.
He joined the Long Covid Support Group, where he’s been sharing his experiences with more than 6,000 others from around the world afflicted with similar symptoms following Covid-19 infection.
His girlfriend, a nurse, lives in town, but aside from a few socially distanced walks, they haven’t seen each other in person in months.
“When I feel ill, I wonder if it’s Covid, or is it me picking up every bug because my immune system is so low?”
He’s caught in limbo somewhere between sickness and health. He has a disease the medical establishment is still struggling to define, and it’s unclear whether it’s safe for him or others to be in contact with each other.
“You kind of feel like a leper, really,” he said.
Read more: Physical distancing measures could reduce new Covid-19 cases by 13%

When Morgan Swank got sick around Christmas, she texted her friends, “I’m dying. I’ve never felt like this before.”
The Atlanta-based television writer has credits on “Saturday Night Live,” “Late Night With Jimmy Fallon,” and “The Mindy Project,” and she now runs a production company focusing on elevating projects from women and filmmakers of color.
Swank had a fever for three weeks and lost her sense of smell for nine days. While ill with what she thought was the flu, she passed out in an airport during an international trip, she said.
A nonsmoker who worked out three times a week, she wasn’t used to struggling for air.
Swank eventually tested positive for Covid-19 antibodies in April, but her lungs are damaged from a month of hard coughing.
She’s back to working out, and in addition to boxing gloves, she now keeps Albuterol inhalers with her boxing gloves in her gym bag. The inhalers help her finish her workout.
“I have to use an inhaler every couple minutes to reinvigorate my lungs,” she said.
Even short conversations can be a struggle. “I hear it in my voice just talking to you,” she said in a phone interview. “I’m winded.”
Getting sick again is her biggest worry, and she feels like her immune system is now compromised.
“I really wish people would wear their masks all the time,” she said. “If I get another respiratory infection like the flu and my lungs get damaged from that, I may have to be hospitalized.”

When Jordan Josey got Covid-19 the first time, he felt like he was suffocating. The disease partially collapsed one of his lungs.
“Shortness of breath was my biggest problem,” he said. “Coronavirus takes your energy away completely. You’re always dazed and tired. I could sleep for 13 hours.”
Josey, who works as a lawyer in Macon, Georgia, tested positive for coronavirus on April 1. He shared details of his 103-degree temperature and stabbing chest pains in his local paper.
He eventually started feeling a little better and tested positive for antibodies. He donated his blood plasma so that others might also benefit from his immunity.
But then in late June, that same shortness of breath and lightheadeness returned. He was winded just folding laundry. He tested positive again.
“I just sat there and shook my head,” he said. “I didn’t want to go through it all again. It was awful.”
On July 1, he dropped that bomb in a text message to his family. With a mother who’s immunocompromised and a grandfather undergoing chemotherapy for cancer, Josey’s second Covid-19 diagnosis has the whole family nervous.
“Nothing about my test indicated it was a second strain,” he said. “I thought, ‘How is this possible?’ And really, no one knows. The doctors think it may have flared back up.”
One of the things that irks him is a common belief that people will be fine after they contract the coronavirus and test positive for antibodies.
“I don’t buy that at all,” he said. “My doctor said I might even test positive a third time.”
Like many in their 20s, Josey and his wife used to love meeting friends for dinner before heading to a concert, bar or club. With him testing positive twice and her testing positive once, they haven’t done that since February.
“This thing is no joke. I’m young and healthy, and it did all this to me,” Josey said. “Coronavirus is now a much bigger threat than it was when I got sick. And it’s all in conjunction with people going to bars and nightclubs and large parties.”

Nearly 1,000 miles away in Queens, New York, Kevin Garcia is also grappling with long-term fallout from Covid-19. He desperately wants his peers to be safe as case numbers rise again.
The college student is currently furloughed from his job during the pandemic. But even if he wasn’t, he doesn’t feel fit to return to work. He’s functioning only at about 75%, and just walking up a flight of stairs is a major challenge.
He’s nowhere near his pre-pandemic days of going to work, school, the gym and bars all in one packed marathon day.
His symptoms began March 25 when he had to call an ambulance. “I felt something foreign in my body.”
Within a week and a half, it felt like his body was in an “all-out war.”
After more than two weeks of body aches, fatigue and gastrointestinal issues, he managed to survive. But his new life is different than the old one.
“I saw doctors bringing out dead bodies every day. I heard ambulances probably 50 times a day,” he said. “I’m glad that I’m alive because a lot of people my age died.”
He too wants to push against the conventional narrative that young people can get sick, get immune and return to their previous lives. And he wants the world to know that post-Covid symptoms aren’t imaginary.
“You don’t tell people with Covid they have anxiety,” he explained. “We’re nervous. We have a disease you guys don’t know enough about. We survived it, and now we have symptoms that are coming and going.”
“I hope that it’s not chronic and that I don’t become bedridden,” he said. “I have a long life ahead of me.”
He’ll turn 25 in December, and didn’t imagine he’d celebrate a quarter century so humbled, and almost certainly without a party. But now forgoing parties is his highest priority for himself, and his generation.
“After the Spanish flu, we had the Roaring ’20s. That could be the case after coronavirus. This is temporary,” he said. “But don’t risk your life. You can die from this.”
His message for young people was that if you didn’t want to hear it from public health officials, you could take it from him: Wear a mask. Avoid crowds. Wash your hands. Don’t touch your face.
“I don’t think anybody should see someone die over one or two hours of fun,” he added.
“We can have days of fun when this is over. Sacrifice the time now.”

Clarification: This story has been updated to remove the last name of a subject who asked to not fully be identified for professional reasons.