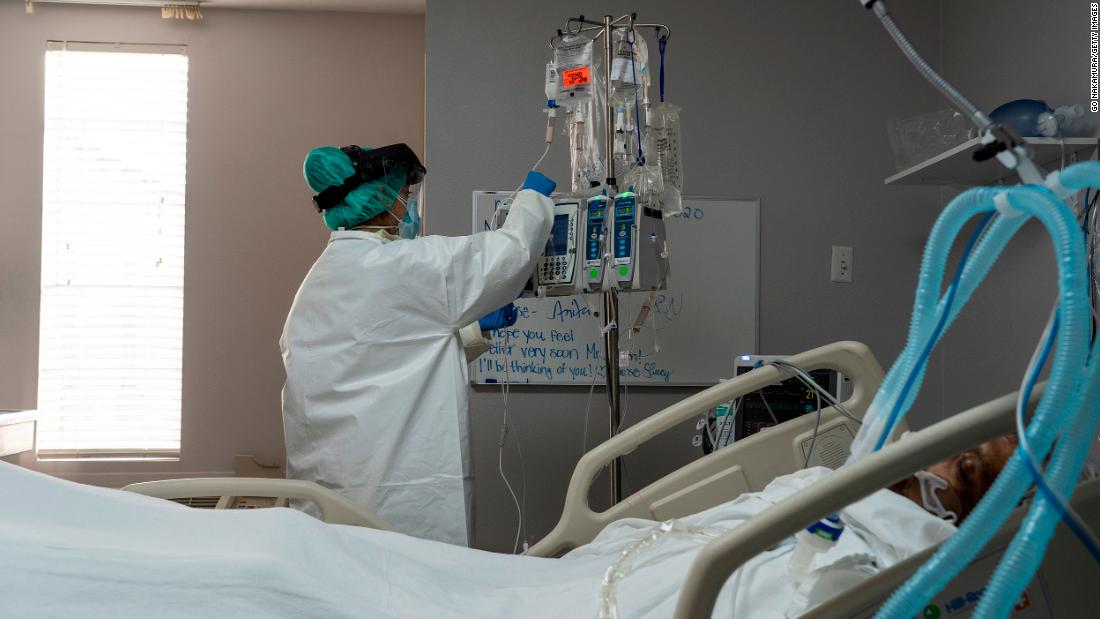 Health, Fitness & Food
Share on Facebook
Share on Twitter
Share on Pinterest
Share on LinkedIn
“In the last three weeks, I have seen more admissions and sicker patients than on the previous 10 weeks,” says Dr. Joseph Varon, the chief medical officer at United Memorial Medical Center. “It’s been an exponential increase on the severity of illness and on the number of cases that we admit.”
In other hospitals across America, similar scenes of crisis.
At least 12 states are seeing a rise in daily hospitalizations, the director of the US Centers for Disease Control and Prevention said this week.
The trend is worrying: A sharp increase in patients can once again overwhelm hospitals, putting critical resources including staffing, beds and ventilators in short supply.
Already, some hospitals are so swamped they’ve transferred patients elsewhere. Doctors in parts of Texas report waiting lists for their ICU beds, while others have had to decide which patients to admit, incapable of treating all those seeking help. In other parts of the US, health care professionals are seeing younger and sicker patients and making a simple plea: Wear a mask and stay at home.
The increasing infections come weeks after many states began reopening their economies after extended closures intended to stem the spread of coronavirus.
“I live close to a beach, and you can see it’s like a party every single day,” says Dr. David De La Zerda, the ICU medical director and a pulmonologist at Jackson Memorial Hospital in Miami.
Among the states seeing an increase are Florida and Texas, which are expected to see nearly 2,000 new hospitalizations per day by mid-July, according to forecasts published by the CDC. In Arizona and California, the forecasts project about 1,500 new patients each day in the next two weeks.

In Harris County, which encompasses Houston and is the most populous county in Texas, at least two hospitals are “pretty much at maximum capacity,” Houston Mayor Sylvester Turner said Wednesday.
“The threat … Covid-19 poses to our community right now is higher than it has been. There is a severe and uncontrolled spread between our families, friends, and communities,” Turner said. “And we need to slow it down, so that it doesn’t overwhelm our health care delivery system.”
Several hospitals across Houston are still within capacity limits, he said.
Among them, United Memorial Medical Center is hovering at about 80% capacity.
Parts of the hospital are quickly transitioning into coronavirus units, with airtight zones around sections where infected patients are stationed. And doctors like Varon, who’s worked more than 100 consecutive days now, are turning into semi-specialists in the virus.
“These patients are very sick. These are patients that are about to die. So, we have to admit them and once they are here, despite of everything that we do, they have to stay in the hospital anywhere between 5 to 10 days at a minimum,” Varon said. “So sooner or later, within the next two weeks, we’re going to be at full house.”
Two facilities within the Harris Health System have had to spread their “load” of patients around, the mayor said.
“It really has intensified in the last month or so,” Charlie McMurray-Horton, the associate administrator for Clinical Integration and Transformation at the Harris Health System told CNN affiliate KTRK.
“We are actively trying to transfer out ICU and surge patients that are COVID positive and under investigation, just because we don’t have the capacity to treat those patients,” McMurray-Horton said.
On July 1, Texas reported 6,904 total hospitalizations — a staggering record high and an increase of more than 2,500 patients in a week. The state’s peak of hospitalizations in May was 1,888.
“The numbers today, this week, over the last several weeks are far worse than the numbers in March, and April, and May. So if we stay on the current trajectory, we are going to run into problems with capacity,” Turner said.

‘We are having an explosion of Covid’

Some local officials and public health administrators are already reporting strained hospital capacity with the latest influx of patients.
In Bexar County, home to San Antonio, officials reported this week the number of hospitalizations continues to rise while hospital capacity has shrunk to a little more than 20%, CNN affiliate KSAT reported.
“We are having an explosion of Covid,” says Adam Sahyouni, a Covid ICU nurse manager at San Antonio’s Methodist Hospital. “We aren’t overrun yet, but it’s overwhelming.”
According to data published by the city of San Antonio, at the beginning of June there were 39 coronavirus patients in the ICU and 20 on ventilators. By June 30, 288 coronavirus patients were in ICUs and 158 on ventilators.
Across the country, one southern California county reported a 99% intensive care unit capacity over the weekend, after taking in overflowing patients from neighboring Imperial County.
“Since mid-June, there has been a growing health crisis with rising coronavirus cases, hospitalizations and ICU bed usage throughout our nation, the state of California and here in Riverside County,” Supervisor Victor Manuel Perez said.
The county announced Monday 96% of all ICU beds were in use — down 3 percentage points from the weekend.
In Florida, the Jackson Health System reported a 108% increase in patients in a little more than two weeks in June, data shows.
As cases across the state continue climbing, President and CEO of Jackson Health System Carlos Migoya told CNN affiliate WPLG hospitals may be in trouble.
“If we continue at the rate we are today, there will be a very high climb, and I don’t know about not having enough beds, but it is already tight.”
At the rate cases are increasing, Miami-Dade hospitals will max out in about a month, the affiliate reported.

Patients are younger and sicker

More young people are testing positive for the virus in recent weeks than in the early days of the outbreak, local and state leaders have said, warning that they can spread the virus even though they may not become severely ill.
In Florida, De La Zerda says the incoming patients in his Miami hospital are younger and sicker than the first time the state saw a rise in cases.
“That’s really our major concern,” he told CNN, adding the hospitalized patients they’re receiving on average are between 25 to 45 years of age. In previous months, that average was above 65, he said.
One San Antonio doctor says his patients are getting “younger and … more sick.”
“The last few weeks have just been overwhelming,” Dr. Jeffrey Dellavolpe at San Antonio’s Methodist Hospital said. Patients are “going from probably 50s and 60s for the first wave to — I’ve lost track of how many people in their 20s.”
In Tucson, Arizona, one doctor says he’s noticed a “dramatic shift” in the ages of coronavirus patients.
“Over this past weekend, the ages of my most seriously ill Covid-19 patients (requiring supplemental oxygen and aggressive respiratory support — none were on ventilators thankfully) were 27, 45, 24 and 32 years,” Dr. Matt Heinz wrote on Facebook.
Health officials in Los Angeles County said this week some of the county’s outbreaks can be traced back to parties and gatherings.
“Unfortunately, many of these celebrations resulted in the spread of COVID-19, and for some, serious illness that required hospitalization,” Los Angeles County Public Health Director Barbara Ferrer said, according to CNN affiliate KTLA.
While many of the hospitalized patients continue to be older, the county’s health services director, Dr. Christina Ghaly, said they’re beginning to see “a slight shift toward a younger demographic.”

Ghaly said this week as cases in the county climb, there soon may not be enough beds for the patients who will need hospitalization.
“The number of hospital beds could become inadequate in the next few weeks,” Ghaly said. There are only enough ventilators in the county to last four weeks, and Ghaly says the county’s projections show a marked increase in mortality rates.
The hospital system could increase capacity by once again canceling all elective surgeries and adding beds in non-traditional areas like emergency rooms.
The Jackson Health System in Miami opted to pause all elective and non-emergency surgeries as a result of a steady increase of patients being admitted in recent weeks. And in Texas, a similar move: the governor issued a proclamation suspending elective surgeries in at least four counties to ensure there are enough hospital beds for coronavirus patients.
At Methodist Hospital in San Antonio, ICU rooms are packed — and some patients are on a waiting list.
“Yesterday was probably one of my worst days that I’ve ever had,” Dellavolpe said. “I got 10 calls, all of whom (were) young people who otherwise would be excellent candidates to be able to put on ECMO (life support). They’re so sick that if they don’t get put on, they don’t get that support, they’re probably going to die. I had three beds.”
“It’s a level of decision-making that I don’t think a lot of us are prepared for.”
In Arizona, too — where ICU bed capacity is at nearly 90%, according to CNN affiliate KNXV — many hospitals may have to use crisis care standards if they become overwhelmed to prioritize patients with higher chances of survival, the affiliate reported.
Making that decision would come down to one question, Dr. Matthew Wynia, an infectious disease and public health expert at the University of Colorado, told the news station.
“What’s the likelihood that you will survive this acute illness and still be alive six months or a year from now,” Wynia explained.