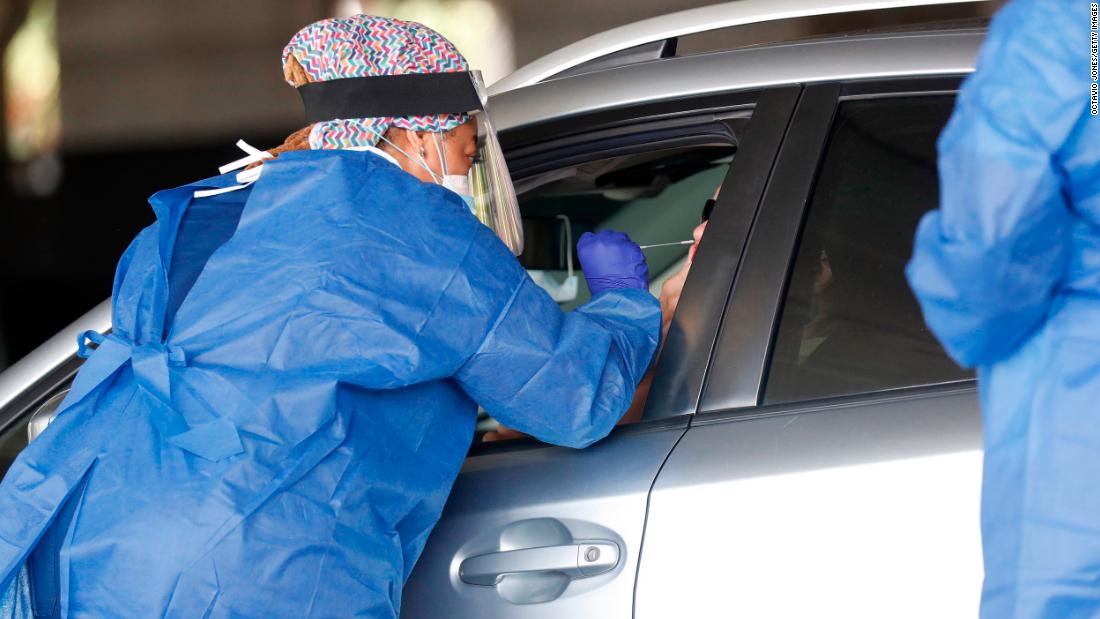 Health, Fitness & Food
Share on Facebook
Share on Twitter
Share on Pinterest
Share on LinkedIn
The record-setting number from Saturday was reported by the state Sunday morning.
But it’s not just the number of new cases that’s concerning. The test positivity rate — which can indicate how rampantly the virus is spreading — reached 19.6% as of Sunday, according to data from Johns Hopkins University.
Across the country, more than half the states are dealing with increased rates of new cases compared to last week. And more than half the states have paused or rolled back their reopening plans in hopes of getting coronavirus under control.
Now, some state and local leaders are at odds over what to do next.
Georgia Gov. Brian Kemp slammed Atlanta mayor Keisha Lance Bottoms’ decision to move the city’s reopening back to phase 1, saying it was “merely guidance — both non-binding and legally unenforceable.”
“As clearly stated in my executive orders, no local action can be more or less restrictive, and that rule applies statewide,” Kemp tweeted.
Phase 1 means residents must stay home except for essential trips. The mayor defended her decision, saying the state reopened recklessly and that Georgians were “suffering the consequences.” She also pointed to higher rates of hospitalizations and deaths, both locally and statewide.
In Florida, Rep. Donna Shalala said places like Miami are getting closer to shutting down for a second time.
“This is an American tragedy,” she said. “It’s out of control across the state because our governor won’t even tell everybody to wear masks,” she said.
Gov. Ron DeSantis has not implemented a statewide mask mandate, claiming last week the state has “stabilized where we’re at.”
But he suggested Florida will hold off on the next phase of reopening, saying “we want to get this positivity rate down.”
Across the country, more than 3.2 million Americans have been infected with coronavirus, and more than 135,000 have died, according to data from Johns Hopkins University.

How states are trending

A new analysis of cell phone data across 10 coronavirus hotspots suggests more people traveled over the July 4 holiday than during the Memorial Day weekend. And mobility is one of the drivers of the virus’ transmission, experts have said.
The analysis comes from data by Cuebiq, one of the private companies used by the Centers for Disease Control and Prevention to track general movement in the US.
It included data from Houston, Austin, Dallas, San Antonio, Phoenix, Orlando, Tampa, Charleston, Miami and Atlanta areas. Travelers tended to visit cities in their own state or region, but some traveled further.
The travels come despite guidance from health officials who urged Americans to skip traditional celebrations, adding residents who may be feeling well could also be carrying the virus.
But that advice didn’t register with some party-goers in Michigan, who tested positive for Covid-19 after attending a lake party in Rapid City.
The Health Department of Northwest Michigan said other health officials in the state reported several people tested positive “after attending the festivities at the Torch Lake sandbar over the Fourth of July holiday,” the department said Friday.
“The positive cases were not able to offer identifying information for all potential contacts, and therefore we want to make the public aware that those who attended could be at risk for exposure,” the health department said.
In Phoenix, Arizona, Mayor Kate Gallego told CBS on “Face the Nation” Sunday that her city was seeing positivity rates over 20% and setting records for ventilator use among Covid-19 patients.
“Our health care workers are telling us they are already tired and they are worried that there could be an additional growth after the Fourth of July,” the mayor, a Democrat, said.

The fiery debate around school openings

President Donald Trump announced last week he’s pressuring governors to reopen schools. And that has made doctors nervous — not just for the safety of students, but for the health of teachers and their families.
“There are a considerable number of states that are surging in cases.” said Dr. Uché Blackstock, emergency room physician and chief executive of Advancing Health Equity.
“(It’s) definitely not safe to open schools until we get the case loads down to a decent level. And that’s not going to happen anytime soon. So we can actually lower the risk by probably instituting remote learning as probably mandatory for most school districts at this point.”
Despite a surge in cases and concerns from educators, Florida’s education department announced it will require schools to reopen in the fall.
Other state leaders have stopped short of announcing any changes just yet, but some local decisions have pushed the beginning of fall semesters back.
The CDC has released guidelines for parents and administrators, though CDC Director Dr. Robert Redfield said the decision for the safest course ultimately lies with the districts.
But internal documents from the CDC warned that fully reopening K-12 schools and universities would pose the “highest risk” for spread of the virus, according to a report by The New York Times. The 69-page document obtained by the Times marked “For Internal Use Only” was among materials for federal public health response teams deployed to coronavirus hotspots.
While children rarely suffer severe complications from Covid-19, they can become vectors for the virus in their communities. And some have developed a condition known as multisystem Inflammatory syndrome in children (MIS-C).
On Sunday, South Carolina reported two new cases of MIS-C in children under 10.
MIS-C appears to develop two to six weeks after a Covid-19 infection and affects mostly children who were previously healthy. Symptoms can include stomach pain, vomiting, fever and rash.
“We continue to see more and more young people, especially those under 20, contracting and spreading COVID-19, and we know MIS-C is a threat to our youngest South Carolinians,” state epidemiologist Dr. Linda Bell said in a press release.
“MIS-C is a serious health complication linked to COVID-19 and is all the more reason why we must stop the spread of this virus,” Bell said.
“Anyone and everyone is susceptible to COVID-19 as well as additional health risks associated with it, which is why all of us must stop the virus by wearing a mask and stay six feet away from others. These simple actions are how we protect ourselves and others, including our children.”