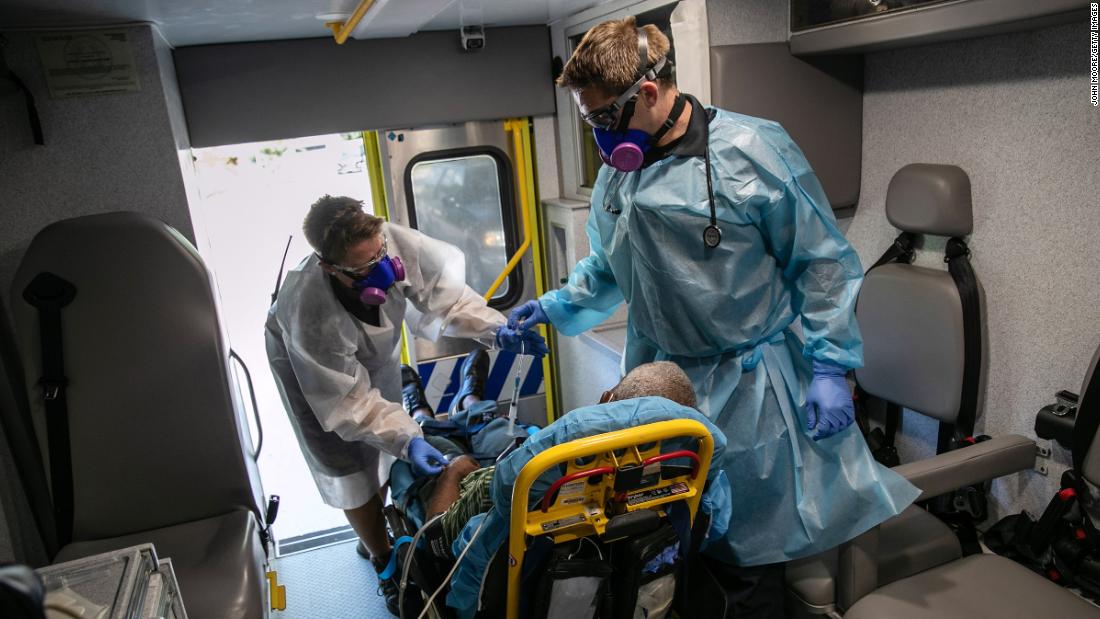 Health, Fitness & Food
Share on Facebook
Share on Twitter
Share on Pinterest
Share on LinkedIn
Nationally, over the past seven days, the United States is averaging just under 53,000 new cases of Covid-19 per day, down 11% from the week prior.
As a result of all those cases, deaths from the virus have remained high. The seven-day average of daily coronavirus deaths was just over 1,000 on Tuesday, the 16th consecutive day the US averaged over 1,000 deaths per day.
Adjusting for population, states in the Southeast are seeing the most new cases. Georgia and Florida — states led by Republican governors who have not issued face mask requirements — have the highest per capita new cases over the past seven days, followed by Alabama and Mississippi.
On Wednesday, Florida announced more than 8,000 new case reports and 212 new deaths, according to data released by the Florida Department of Health.
Covid-19 causes worse outcomes for older people, but young people are not immune. In Florida, people under 44 make up about 57% of the state’s 545,000 cases, 20% of the state’s 31,900 hospitalizations, and 3% of the state’s 8,765 deaths, according to state data.
Robert Ruiz, 31 and the father of a 3-year-old, was one of the 265 people under 44 who died from coronavirus in Florida.
His sister, Chenique Mills, told CNN he was overweight and had seasonal asthma but otherwise did not smoke or drink and had no underlying health conditions.
“This is all really sudden, unexpected,” she said. “I (saw) him on Friday. I (saw) him on Saturday. He was fine, to say that he was up, and he was walking and he was eating. He was functioning. So for him to be gone on Sunday? It’s just a lot to take in.
“This virus is so serious. It really really is. And I think people (won’t) understand until it hits home, because I would be one to say that I took it really lightly until it hit home.”
The virus’s ongoing spread around the country has frustrated plans to safely reopen schools, forced college football conferences to postpone the lucrative fall season, and caused vast medical and economic pain.
And it will continue to rattle American society until people more seriously adopt recommended public health measures: social distancing, avoiding large indoor gatherings, hand-washing, mask-wearing, rapid testing and quarantining the sick.
“We have to figure out how to deal with this as a whole country because as long as there are cases happening in any part, we still have transit, especially now we have students going back to college,” said Dr. Michael Mina, assistant professor of epidemiology at Harvard T.H. Chan School of Public Health. “Any cases anywhere really keep risk pretty high all across the entirety of the United States.”

Positive tests amid starts to a new school year

School buildings have begun to reopen across the country, even as new coronavirus cases among students and staff have been reported in places where in-person learning has resumed.
The coronavirus generally spreads anywhere people gather closely, such as schools. As such, of the 101 largest school districts in the country, 63 will start the new academic year remotely.
Some schools that have reopened have already seen new cases.
For example, a Mississippi kindergarten class is quarantined just two days into the new year after a teaching assistant tested positive for Covid-19, a school district official said.
Public schools in Elizabeth, New Jersey, had to scrap plans to return to classrooms and switch to virtual learning after more than 400 teachers notified the district that they could not return to campus due to “special considering for health-related risks.”
Students have not yet returned to school in the Broken Arrow Public School District in Oklahoma, but 33 district employees tested positive last week, Superintendent Janet Vinson said Monday, according to the Tulsa World.
Meanwhile in Georgia, just outside Atlanta, more than 1,100 students, teachers and staff members in the Cherokee County School District are under quarantine as a result of 59 Covid-19 positive cases or exposure. Schools reopened nine days ago.
Rhode Island Gov. Gina Raimondo announced Wednesday the start of school will be punshed back two weeks and specifically said that the photos of crowded Georgia schools were “a cautionary tale.”

Texas warns of letting guard down

In Texas, state officials redoubled their efforts to get residents to wear masks and practice social distancing, and suggested people have let their guard down.
“The most important thing I could convey today that is even though the numbers of Covid-19 have improved, it has not left Jefferson County, it has not left Orange County, it has not left the state of Texas,” Gov. Greg Abbott said in a news conference Tuesday.
The Dallas area will be the site of an MLS match with as many as 5,000 fans in attendance on Wednesday night.
Texas has been at the center of a summer surge in coronavirus cases along with California and Florida, which are both reporting thousands of new daily cases.
Infection and hospitalization metrics are improving in the state, but are “still too high,” Abbott said. To get businesses running more regularly, Texans need to lower the state’s test-positivity rate below 10% and stick to safety precautions, he said. The state’s test positivity has averaged over 20% the past week, according to Johns Hopkins University.
Texas’s case spike in July came after people let their guards down as the state reopened, Beaumont Mayor Becky Ames said in the news conference with Abbott. And rising positivity rates now could be the result of the same thing, Abbott said.
You asked, we’re answering: Your top coronavirus questions
“There’s a reason why this is happening, I believe, and that is some people feel if they’re just with family members — even if it’s 50 family members — they can let their guard down,” Abbott said. “And that turns out not to be the case.”
Texas’ average new coronavirus cases rose from a plateau of around 1,500 per day in early June to more than 10,000 daily by mid-July. They’ve dipped to an average of about 7,300 daily on Tuesday, Johns Hopkins data show.
Nationwide, more than 5.1 million people have tested positive for the virus and more than 165,531 have died, according to Johns Hopkins.

Rely on the science and avoid the politics, Fauci says

Although practices like wearing face coverings have been politicized, Dr. Anthony Fauci said Tuesday he has learned that in order to be a good public health leader in a crisis, you have to divorce yourself from politics, rely on science and be as transparent as possible.
“Completely divorce yourself from the kind of political undertones that sometimes go into an important outbreak like this,” Fauci, director of the National Institute of Allergy and Infectious Diseases, said as he was honored with a 2020 Citizen Leadership Award on Tuesday night by the Aspen Institute.
“You’ve got to stay away from that, lead by example, be perfectly honest and don’t be afraid to say you don’t know something when you don’t know it. I find that to be a very good formula when you’re dealing in a crisis.”
Even with the polarization, every state in the US passed at least one physical distancing measure in March to slow the spread, researchers from Harvard University and University College London said. Those measures worked, a new study found.
Physical distancing resulted in a reduction of more than 600,000 potential cases within just three weeks, according to the study, published Tuesday in the journal PLOS. Had there not been preventative interventions, the models suggest up to 80% of Americans would have been infected with Covid-19.
“In short, these measures work, and policy makers should use them as an arrow in their quivers to get on top of local epidemics where they are not responding to containment measures,” said the study’s co-author Dr. Mark J. Siedner in a news release.