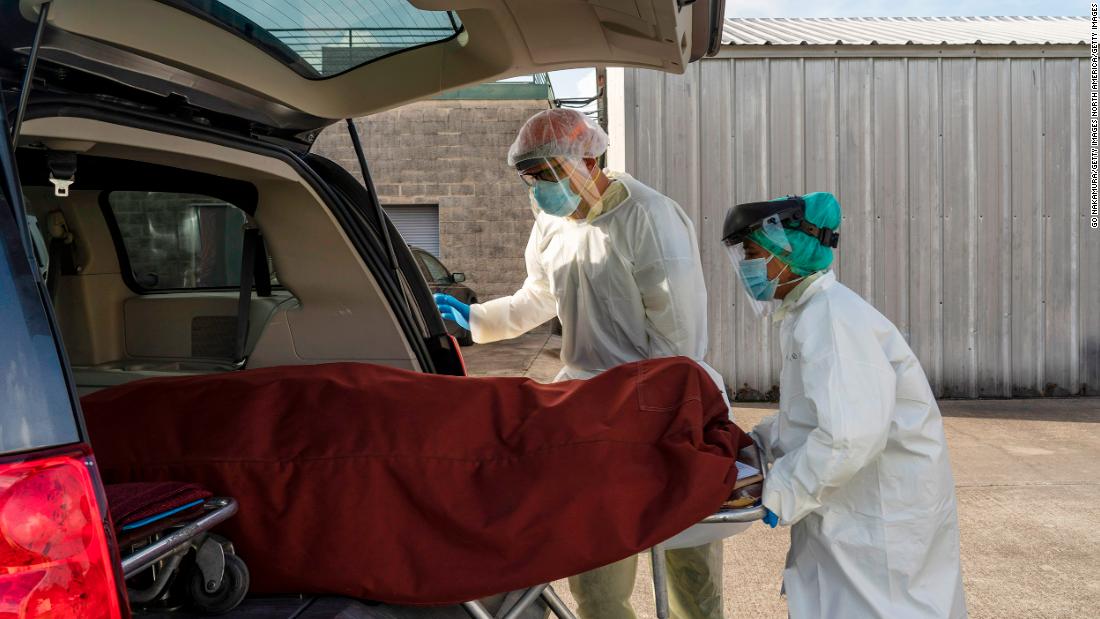 Health, Fitness & Food
Share on Facebook
Share on Twitter
Share on Pinterest
Share on LinkedIn
The virus is now hitting urban, suburban and rural areas and has even spread to Americans living on distant islands. Hawaii and Puerto Rico both saw their highest seven-day averages of new daily cases on Monday, per data from Johns Hopkins University.
Nationally, the seven-day average of new daily cases is at about 60,000 and slowly declining, while deaths, which typically lag several weeks behind, are steadily increasing. For a week straight now, the US has had a seven-day average of over 1,000 deaths per day.
At the same time, the states that led the summer surge — California, Florida, Texas and Arizona — have seen cases plateau and slightly decrease in recent weeks from their highs. Florida is averaging about 8,448 new daily cases per day over the last seven days, a number that is actually 18% lower than the week prior.
Tropical storms and hurricanes will complicate the efforts to cope with the coronavirus, the Pan American Health Organization said Tuesday.
Tropical storm Isaias, now rolling up the US East Coast, is a reminder of how storms can disrupt public health efforts. Isaias has caused flooding and spawned tornadoes, driving people from their homes and knocking out electricity for hundreds of thousands of people.
“This is adding a new layer of complexity to the response to the public health emergency for Covid-19,” Dr. Sylvain Aldighieri, incident manager for PAHO, told reporters.
“With the Covid-19 situation, we have to be prepared for a set of new challenges in terms of population that would have to move to shelters, with new challenges for implementing the social distancing, the hand hygiene, the wearing of masks,” Aldighieri said.
Evacuations and power outages can especially threaten efforts to treat coronavirus patients — and others — in intensive care units, Aldighieri said.

A third US company released study results showing its coronavirus vaccine is safe and elicits an immune response.
Novavax Inc., released Phase 1 data Tuesday from 131 volunteers showing that after two doses of the vaccine, participants developed neutralizing antibodies at levels more than four times higher, on average, than antibodies developed by people who’d recovered from Covid-19.
Neutralizing antibodies fight off the virus that causes Covid-19.
“That’s good. That’s really encouraging,” said Novavax president Dr. Gregory Glenn.
The vaccine also induced a response from T cells, a type of immune cell, according to an analysis of 16 randomly selected volunteers, the report states.
The report was posted on a pre-print server and has not been reviewed by other scientists.
Two other US companies — Moderna and Pfizer — have released encouraging Phase 1 data. Last week, those two companies started their Phase 3 trials with 30,000 volunteers each.
Also on Tuesday, governors from Maryland, Louisiana, Massachusetts, Michigan, Ohio and Virginia announced a bipartisan compact to run 3 million rapid antigen tests to slow the spread of Covid-19 and continue safely reopening their states, according to a statement.
The agreement between six governors—three Republicans and three Democrats—demonstrates to private manufacturers that there is in fact a significant demand to scale up the production of these the rapid tests, which deliver results in 15-20 minutes, the statement reads.
The states are currently in discussions with Becton Dickinson and Quidel, two US manufacturers of antigen tests that have already been authorized by the FDA, to purchase 500,000 tests per state, for a total of three million tests, according to the statement.
Further, the National Institutes of Health (NIH) said Tuesday it is launching two advanced trials to test monoclonal antibody treatments in patients with Covid-19, one for patients with mild disease and another for patients who are hospitalized.
NIH made an initial announcement during a telebriefing earlier on Tuesday, and in a news release later clarified the two trials would be concurrent.
“Studying the impact of this investigational therapeutic on multiple patient populations at the same time is critical to determining whether it can help Covid-19 patients with differing levels of disease severity,” Dr. Anthony Fauci, director of the National Institute of Allergy and Infectious Diseases, said in a statement.
“These concurrent trials have the potential to yield significant and comprehensive clinical data.”

There are some states that have gotten it right by not letting up on restrictions after their case numbers began dipping.
Connecticut, for example, has one of the lowest infection rates in the country. The state is in its second phase of reopening, and restaurants are limited to 50% indoor capacity and bars remain closed. All businesses that reopen must first certify with the state they are following coronavirus-related guidelines.
Fauci, the nation’s top infectious disease expert, praised the state Monday.
“You’re not pulling back on your vigilance, and making sure you don’t have resurgence of cases that would put you back, rather than stay where you are and going forward,” Fauci said.
Other states, like New York, which were slower to reopen, lifted restrictions by regions, and are cracking down on individuals and businesses not adhering to guidelines, are also reporting good news. New York’s positivity rate over the weekend was lower than 1%, the governor said.
Still, these states are not without their own issues. In New York City, the Commissioner of the NYC Department of Health Dr. Oxiris Barbot suddenly resigned Tuesday after reportedly clashing with Mayor Bill de Blasio over the past several months.
“It has been clear, certainly in recent days, that it was time for a change and really about how we move forward,” the mayor said.
Dr. Dave A. Chokshi will take Barbot’s place, according to de Blasio’s office.

At least 13 states have reported more than 100,000 coronavirus infections and four of them — California, Florida, Texas and New York — have recorded more than 400,000.
California, with more than 516,000 positive cases, has reported the most infections in the nation, but is beginning the week on a positive note. The state reported a seven-day average of cases of about 7,764 Monday, which is down about 21% from the previous week, Gov. Gavin Newsom said.
In Los Angeles County, officials said they’re cautiously optimistic as data trends seem to be stabilizing and moving slightly downward. Los Angeles is seeing a seven-day average of about 2,600 cases per day, down from a couple weeks ago when that same average was more than 3,000 cases each day.
Florida has the second-highest number of cases in the country, with more than 491,000 recorded infections, and will soon surpass half a million cases.
In Texas, Houston Mayor Sylvester Turner, who in July proposed a two-week stay-at-home order to help drive down cases, said Monday the city will issue citations and fines to people who are not following the state’s mask mandate. The state has reported more than 455,000 infections and more than 8,000 people are hospitalized statewide. “