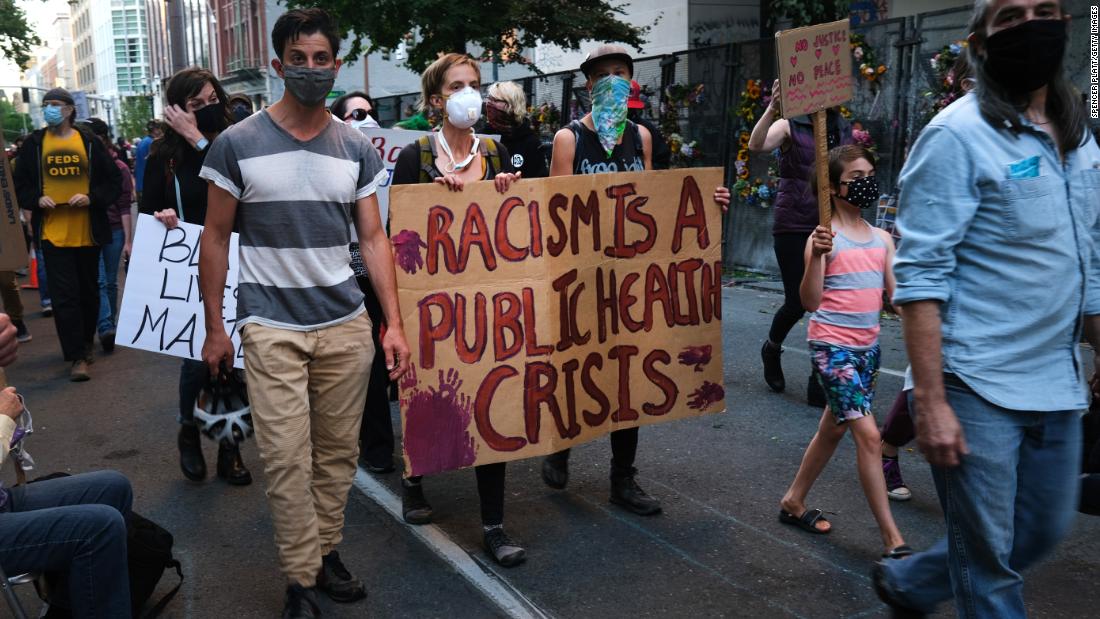 Health, Fitness & Food
Share on Facebook
Share on Twitter
Share on Pinterest
Share on LinkedIn
Michigan and Nevada became the latest states to declare racism a public health crisis earlier this month, joining Wisconsin and local governments in California, Ohio and other states following the killing of George Floyd in Minneapolis.
Treating racism as a public health issue isn’t a new idea. A handful of local governments declared it a crisis last year, and health professionals have identified racism as a public health issue for well over a decade.
These latest declarations and resolutions, though, come as the country remains in the midst of a national reckoning on race. Both the Covid-19 pandemic and the recent killings of Black people at the hands of police have brought renewed attention to the ways that systems and institutions disadvantage people of color, especially Black Americans.
Now as communities call on their leaders to address systemic racism, more governments are considering similar declarations.
“What we’re hoping will happen is that by thinking of this through a public health lens, it will help people recognize that racism actually hurts people — it impacts their health in a negative way,” Georges Benjamin, executive director of the American Public Health Association, told CNN. “Then we’re hoping that once people recognize that and they take the next step, they will begin to do things to unravel that.”
Here’s what it means to treat racism as a public health crisis, and why officials believe it’s necessary.

How racism and health are tied

When health experts talk about racism as a public health issue, they are referring to the ways that racism affects where people live, where they go to school, the quality of the air they breathe, their income and wealth, their access to food and healthcare and more.
“How does that relate to public health? Because you are where you live,” Jeffrey Sánchez, a public health advocate and former Massachusetts state representative, told CNN.
Racism helps explain why Black and brown patients experience worse health outcomes than their White counterparts in nearly every category, even as they move up the socioeconomic ladder.
Black women are nearly four times as likely to die of pregnancy-related causes than White women. Black men are more than twice as likely to be killed by police as White men. Black people are more likely than White people to experience high blood pressure, diabetes and stroke. And they’re more likely to die at early ages of all causes.
The Covid-19 pandemic perfectly encapsulates how racism manifests in public health.
Black and Latino Americans who get infected are more likely to have pre-existing conditions that increase their risk of severe illness, according to a report from Johns Hopkins. Because they are more likely to be uninsured, they tend to put off seeking treatment and are sicker when they do receive care. On top of that, they tend to receive less aggressive treatment than White Americans, the report states.
At home, crowded housing conditions make it harder for Black and Latino Americans to practice physical distancing, and many of them work in essential jobs that can’t be performed remotely.
“Racism has been killing people for a long time, either through benign neglect, aggressive policing, gentrification, or through a healthcare system that doesn’t know how to take care of people of color,” Sánchez said.
The ongoing protests and national outcry over systemic racism that erupted after the death of George Floyd has put increased pressure on leaders and institutions to address racism in their communities.
Increasingly, more state and local leaders are doing the same.

What the declarations do — and don’t — entail

That states, counties and cities are recognizing the extent to which racism affects people’s lives is an encouraging first step, public health experts said.
“They help us define that there is a problem,” Benjamin said. “The first part of trying to solve a problem is to identify that it exists.
But many of the declarations are just that — statements that name the issue and pledge to do better but stop short of outlining a clear plan of action or allocating funds for the problem.
“Ultimately what does it mean?” asked Sánchez. “Is the state going to figure out how to put more resources into the public health infrastructure that deals with the social determinants of health? Are they going to stratify data on where people are and how they’re doing and how sick they are and target them with public health messages?”
Wisconsin Gov. Tony Evers, a Democrat, called racism a public health crisis at a news conference in June, though the state has not issued a formal declaration.
“Just like we cannot look away from police brutality and the killing of Black men and Black women, we cannot look away from the reality that inaction, indifference and institutional racism has harmed generations of Black and brown Wisconsinites,” Evers said in June.
At that same news conference, Evers rattled off statistics highlighting the disparities between the state’s Black and White residents. He also called on the state legislature to pass a bill that would limit police use of force.
Nevada’s declaration came on August 5 in the form of a proclamation issued by Democratic Gov. Steve Sisolak. The proclamation offered few specifics, though the governor’s office said it builds on work that is already being done by the state’s Office of Minority Health and Equity.
“Given Nevada’s diverse population as a minority, majority state, this call to action raises awareness so Nevada does not perpetuate poor health outcomes due to systemic racism during and after the pandemic,” Sisolak’s office said in a news release.
Michigan went further.
Democratic Gov. Gretchen Whitmer signed an executive order on August 5 directing the state’s health department and other state agencies to collect and analyze data on health outcomes by race, develop plans to tackle racial inequities and engage communities in developing solutions to the problem. It also requires state employees to complete implicit bias training on a biannual basis.
Whitmer, a first-term governor, also created an advisory council made up of Black leaders to address issues affecting the state’s Black residents.

What these places can learn from Milwaukee

For an example of how to move forward after issuing a declaration, leaders might look to Milwaukee County, Wisconsin.
The county became one of the first local governments to declare racism a public health crisis in April 2019. About a month later, the county passed a resolution pledging to address racial disparities.
Then in late April of this year, leaders passed an ordinance that outlined a framework for improving health outcomes in the community and addressing biases in its government.
The ordinance commits Milwaukee County to ensuring that its leaders reflect its population and evaluating what services it offers and how it spends its budget, among other objectives.
Since then, David Crowley, who was recently sworn in as county executive, said that Milwaukee County has been taking a “deep dive” into the disparities it is perpetuating through its policies, procedures and internal hiring processes.
“For at least the past decade, we’ve been at the top of many of the worst lists,” Crowley told CNN. “… If we want to get off that list, we’re going to have to take a hard look at ourselves and take the proper steps to do so.”
Crowley said that since last year’s declaration, thousands of county employees have undergone racial equity trainings that cover microagressions, implicit biases and other issues. The county has also created a “racial budgeting tool” that will allow it to assess the impact that budget cuts and investments have on communities of color.
Though the coronavirus pandemic has stalled the county’s efforts, Crowley said that the declaration and ordinance have put the county on a path to ensuring racial equity.

What needs to happen next

The growing list of states and localities that are recognizing racism as a public health crisis signals that more people are coming to understand the myriad ways that race shapes a person’s outcomes, Benjamin said.
But the true test, he said, will be whether elected officials “walk the talk, not just pass the resolution.” And that entails making sure that governments have the data they need to understand disparities and that they think about the impact that the existing and proposed laws will have on their communities.
“It’s going to require proactive action,” Benjamin said. “… You actually have to ask for change, and that means you have to measure what you’re doing. You have to get the data and look at the impact and understand why you have that impact.”
The hope among public health experts now is that the momentum of the racial justice movement continues.
“Our hope is that it doesn’t stop, and that this current crop of elected officials don’t just let it lay there,” Benjamin said.
Because while recognizing the problem is key, what ultimately will make a difference in the lives of people is what leaders do about it.
This article was originally published by Cnn.com. Read the original article here.
Share on Facebook
Share on Twitter
Share on Pinterest
Share on LinkedIn