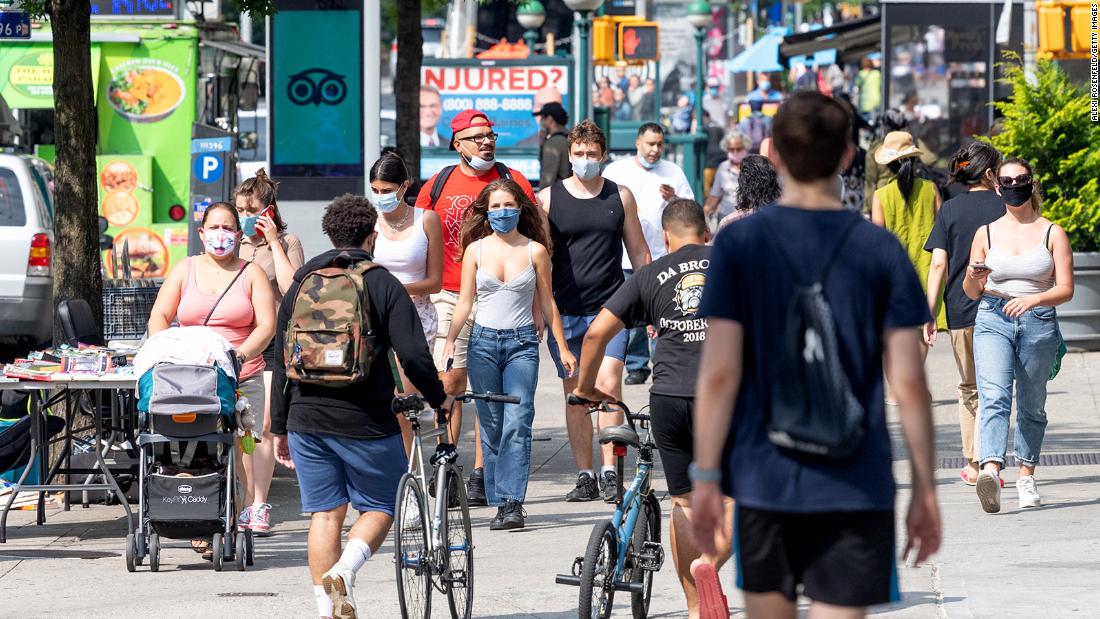 Health, Fitness & Food
Share on Facebook
Share on Twitter
Share on Pinterest
Share on LinkedIn
When case numbers start to come down, people tend to interact more, and more movement predicts how the virus will spread, said Dr. Christopher Murray, director of the Institute for Health Metrics and Evaluation (IHME) at the University of Washington.
Though cases have risen to more than 4.9 million and coronavirus deaths have surpassed 161,000, former hotspots like New York are seeing positive changes. But health experts have predicted the national death toll will get worse through the year, and many have called for a stronger national leadership against the virus.
In list ranking countries response to the pandemic assessed by Foreign Policy Magazine, the United States ranks near the bottom.
“If you look at the mobility data collected from cell phones in many parts of the country, we’re almost back to pre-Covid levels of mobility, so we’re just not being as cautious as other people are in other countries,” Murray told CNN’s Wolf Blitzer on Friday.
Precautions can bring and keep the numbers down while the nation waits on a vaccine, US Surgeon General Dr. Jerome Adams said in a news briefing Friday. All it takes is what he calls his “Three W’s.”
“Number one, wash your hands. Number two, watch your distance — meaning stay at least six feet from others and avoid crowded places. And number three, wear a face mask,” Adams said.
There is encouraging news: Murray said Friday that the rate of mask use in the US has gone up about 5% in the last 10 days, particularly in states with higher caseloads, like California, Texas and Florida.
That could save tens of thousands of lives. While IHME’s model projects more than 295,000 deaths in the US by December 1, it also shows that consistent mask wearing could save more than 66,000 lives.

Adding to the nation’s struggle is the pandemic’s economic fallout.
President Donald Trump signed four executive orders on Saturday, including one that would provide $400 in enhanced unemployment benefits — 25% of which states are expected to cover — after negotiations stalled this week over a new stimulus package.
The other three orders signed by the President include a payroll tax holiday for Americans earning less than $100,000 a year, as well as extending an eviction moratorium and deferring student loan payments.
The actions are likely to be challenged by Democrats in court.
Up to 40 million Americans risk eviction by the end of the year, according to a report published Friday by the Aspen Institute. And while the US economy added another 1.8 million jobs in July, it was a slowdown from the 4.8 million jobs added in June and a small step for an economy still down 12.9 million jobs during the pandemic.
In Los Angeles Friday, cars lined up at a backpack and food giveaway for families of students. Among them was Henry Herrera, a father of two who said he’s unemployed due to the pandemic.
On Friday he was able to get backpacks and food for his children who rely on school meal plans for breakfast and lunch. Herrera showed CNN a box full of fresh produce like apples, potatoes and carrots.
“That’s really helped out a lot, because with Covid-19 I ain’t able to work. We’re struggling here and there to make ends meet,” Herrera said, adding, “but we’re doing it though.”
The Covid-19 pandemic has disproportionately impacted the poor, in addition to older populations and people with chronic conditions, explained Dr. Richard Seidman, the chief medical officer at L.A. Care Health Plan, one of the hosts of the drive-thru event.
“The communities with the highest rates of poverty also have the highest rates of infections and deaths,” Seidman told CNN. “So the longer this drags on — and unfortunately with some of the challenges at the national level with Congress failing to pass and extend some of the financial aid benefits — it pushes some people that much more into poverty.”

One important factor to reopening the US while maintaining safety is rethinking the national strategy on testing for the virus, said Dr. Rajiv Shah, president of the Rockefeller Foundation and former USAID administrator.
Currently, only symptomatic people are frequently tested, meaning 40% to 50% of all spreaders, those who don’t show symptoms, aren’t being tested and told they may be contagious, he said.
“You have to know that as soon as possible, and then limit transmission from that node of contagion,” he said during an Aspen Ideas webinar on Friday. “That’s the whole ball game.”
But even testing primarily symptomatic people been impacted by backlog, many states report.
The Virginia Department of Health reported a sharp increase of cases on Friday, but that increase came from a technical issue and a backlog from the two days prior, according to a statement.
And Miami-Dade County, the hotspot for cases in Florida, continues to struggle with a lag in testing results, according to state data obtained by CNN.
One day in the past week, testing labs reported that 19.2% of test results took more than seven days to deliver. On a different day, 45% of test results took between four and seven days.

Precautions matter for children, too

Researchers are learning more about how the virus spreads among children.
A new report from the Centers for Disease Control and Prevention supports the early belief that most coronavirus cases in children appear to be either asymptomatic or mild. But, the report said, when children are hospitalized, they need the intensive care unit as often as adults do.
To slow the pandemic, the CDC said children should be encouraged to wash their hands often, keep a good physical distance away from others, and if they are 2 years of age or older, they should wear a mask when they are around people outside of their family members.
One rare but serious complication children can develop from a coronavirus infection is known as multisystem inflammatory syndrome, or MIS-C, and at least 570 cases have been reported, the CDC said.
As the pandemic continues, health care providers should be on the lookout for the syndrome that most commonly causes abdominal pain, vomiting and a skin rash.
More than 74% of the cases were among Hispanic and Black children, the CDC said.
The report comes as schools reopen for the new school year, including in the largest school district in Georgia, where teachers are protesting the decision to resume in-person instruction on August 26, after just two weeks of online learning.
At least 263 Gwinnett County employees have already tested positive for Covid-19 or are in quarantine, and school hasn’t even started.
“It seems like standardized test scores matter a whole lot to this county,” teacher Brian Westlake told CNN’s Natasha Chen. “But Covid test scores don’t seem to matter enough.”
Dr. Marybeth Sexton, an assistant professor of infectious disease at Emory University, warned that with community spread, there’s a risk of students and staff showing up with Covid-19.
“With the degree of cases we’re still seeing in the Metro Atlanta area and a lot of places throughout the United States, it means on the first day of classes, you’re going to have a certain percentage of students and faculty who show up who are already infected,” she said.
She said masks were vital for the safety of not only everyone in the school building, but also the wider community. “Those students are going home to family members who may be vulnerable, and the teachers, the school bus drivers, the school custodians, the people who work in the cafeteria — all of those people are at risk, too.”

State and local leaders across the country continue to try and contain the spread of the coronavirus as the number of US cases nears 5 million cases.
South Carolina’s Department of Health and Environmental Control (DHEC) on Saturday announced a new “Fight the Spread” campaign, encouraging residents to wear masks, practice social distancing and get tested. The state reported 1,178 new cases, bringing the statewide total to more than 98,700, according to DHEC.
Wisconsin saw its highest daily new case count on Saturday, with 1,165 reported cases, according to the Wisconsin Department of Health Services, bringing the statewide total to 59,933 reported cases.
Illinois reported 2,190 new cases on Saturday — the second day in a row that the state’s health department reported more than 2,000 new Covid-19 positive cases. It was the highest daily reported case count since May 24, when the department reported 2,508 new cases. Statewide, there are more than 192,698 cases, according to the department of health.
Texas Gov. Greg Abbott extended his state’s Covid-19 disaster declaration on Saturday, nearly 5 months after it was first issued on March 13 to help Texas counties fight the pandemic.
“I urge Texans to remain vigilant in our fight against this virus,” Abbott said in a statement. “Everyone must do their part to slow the spread of COVID-19 by wearing a mask, practicing social distancing and washing your hands frequently and thoroughly.”