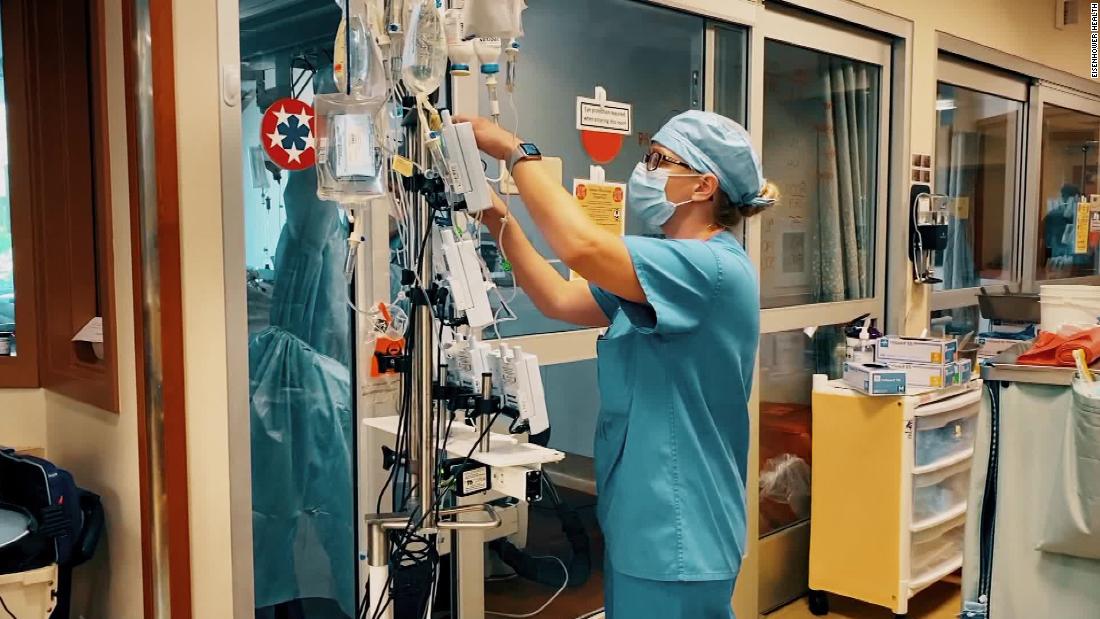 Health, Fitness & Food
Share on Facebook
Share on Twitter
Share on Pinterest
Share on LinkedIn
Even then, she says she is sometimes awakened with thoughts of “How long are we going to sustain this? How long are we going to be faced with this every day?”
Davis is the nursing director at Eisenhower Health in Rancho Mirage, California, a desert town in Riverside County about 100 miles from Los Angeles. She and her colleagues are nearing exhaustion as a surge of coronavirus cases has nearly overwhelmed the staff there.
California looks set to surpass New York as the state with the most cases within days, according to numbers from Johns Hopkins University. It has recently been reporting about 9,000 new cases each day for a total of 397,870 on Monday.
New York, meanwhile, has been adding a little more than 700 cases a day in the last week. Its total number of cases Monday was about 404,000.
“Up until this (coronavirus outbreak), on my unit we would for the most part possibly lose one patient a year,” Davis said. “We have had 40 deaths on our unit. However, we’ve treated over 700 patients.”
With a death count far beyond anything anyone in her unit has ever seen in such a short time, she said the staff are emotionally and physically spent.
“We actually agreed as a staff, if we were comfortable with it, we would ensure that a patient would not die alone. So, we would take turns spending time with them and holding their hands and talking to them,” Davis said.
A medical team from the US Air Force was sent to the hospital to assist with the surge of patients.

California was moving in the right direction

This was not how Davis envisioned what would normally be a sleepy summer in her town. California appeared to be moving in the right direction when it came to Covid-19.
It was the first state to impose a stay-at-home order on March 19. Less than two months later, on May 8, the numbers had fallen enough that the state started the first phase of reopening.
California Gov. Gavin Newsom told his citizens,” You have bent the curve.”
But then Memorial Day came around. By early June the numbers started creeping back up. The seven- day average for daily coronavirus cases totaled more than 2,600. Then they skyrocketed.
By July 11, the seven-day average had risen to 9,400 new cases of coronavirus per day, a more than 250% increase. The numbers fluctuate daily but the trend shows California is in surge. By July 13, Newsom ordered the shutdown of bars, indoor dining, movie theaters, wineries and some other businesses across the state again. So what went wrong?
Anne Rimoin, an epidemiology professor at the University of California Los Angeles, says the answer is simple. Some governments and people became complacent.
“You know, we opened up too soon. We didn’t have the virus totally under control,” Rimoin said.
But, she added, “People are not following the rules. They’re not wearing masks. They’re not social distancing. They’re not doing what it is that they need to do.”
At one point, places like Riverside, San Bernardino and Orange counties, stopped requiring masks. But the governor eventually stepped in and mandated masks statewide in late June.
In Orange County, which borders Los Angeles County, about 100 people attended a county Board of Supervisors meeting in mid-June to speak their minds about a mask mandate that had been in place just two weeks. Every speaker except one wanted the mask mandate eliminated.
“This mask mandate is ridiculous,” one woman said as she stood at the microphone.
Another woman thought it was all based on a hoax. “None of this is based on science, but rather a nefarious political agenda to silence the people and strip freedoms from hard-working American,” she said.

‘Sicker than you can imagine’

They got their wish but now Americans are getting infected at alarming rates in their community. Any epidemiologist will tell you wearing a mask is no hoax but is based on simple science.
But if people don’t believe public health officials, they might believe the nurses and doctors charged with taking care of the sick in their communities. They are seeing their hospital beds fill with people suffering from Covid19.
“They are sicker than you can imagine and beyond that. We are not trying to say that every person who gets the virus gets sick and ends up in the hospital, said Dr. Anil Perumbeti, a pulmonologist who works at Eisenhower Health in Riverside County. “But the numbers are so staggering that it’s scary.”
Los Angeles County is still the hardest hit. It is the most populous county by far with more than 11 million people. It has more than 40% of all the coronavirus positive cases in the state. Masks are mandated there but experts say it is clear that some people are flouting the rules.
While the county is testing tens of thousands of people daily, it takes longer to get an appointment to get a free test by the county and getting results is taking too long as well.
Among those helping fuel the spread are people 40 and under as they are responsible for more than 50% of new cases, according to the state Health Department.
The surge is also hitting the Latino community hard. Latinos are 38.9% of the state’s population but account for 55% of cases in California, according to the state Health Department. That may be due in part to the fact that Latinos often live in multigenerational housing and Latinos make up a large portion of essential workers where there is an increased chance of being exposed to the virus.
“Sometimes it’s mom and dad’s work experience that has brought them into contact with it,” Davis said. “And then it goes through the whole family.”
For example a survey conducted in a heavily Latino population in southeast Los Angeles found 41% of residents say they continue to work outside of their home.
In the end the solutions are simple but devastating. Los Angles Mayor Eric Garcetti said the city is nearing the brink of another shutdown order but Rimoin said the state was already there
“I really see no other choice, but for California to shut down right now, to really shut down for a couple of weeks so that we can get this virus under control,” she said.
CORRECTION: An earlier version of this story misstated the current requirements of California’s statewide mask mandate.