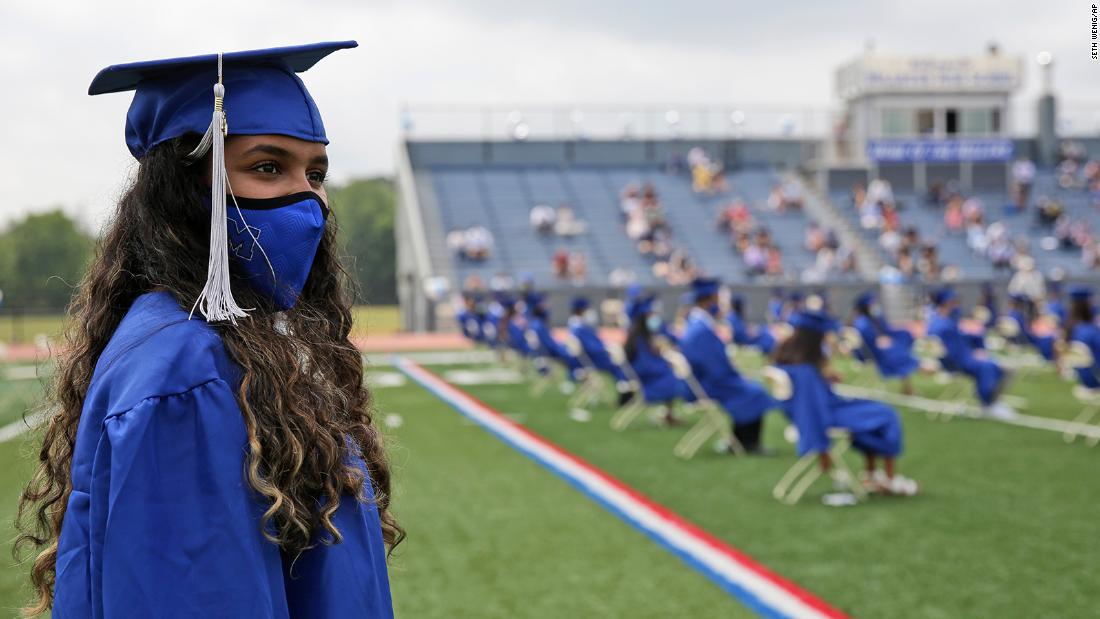 Health, Fitness & Food
Share on Facebook
Share on Twitter
Share on Pinterest
Share on LinkedIn
Thursday brought 63,247 new Covid-19 cases nationwide, a single-day record, according to data from Johns Hopkins University. The new high comes as many states set records in infection rates and hospitalizations.
While 29 states saw an increase in new cases compared to last week, Miami-Dade County in Florida on Friday reported a staggering 28% positivity rate, or the percentage of people tested who test positive for the coronavirus.
Mayor Carlos Gimenez’s office said the goal is to not exceed a positivity rate of 10%, but the county has exceeded the 18% mark for the past 14 days. On Thursday, it was 33.5%.
Over the past 13 days, hospitalizations in Miami-Dade County have gone up by 74%, the number of beds in intensive care units being used has increased by 88% and the use of ventilators has soared by 123%, according to the latest data from the county government.
“The situation is really concerning here in South Florida,” Dr. David De La Zerda, the lead ICU physician at Jackson Memorial Hospital in Miami, told CNN on Friday. “All the health care workers have a huge burden.”
But Florida Gov. Ron DeSantis said Friday there is no lack of ICU beds in the state
“You’ve got a lot of beds available,” DeSantis said at a news conference in Orlando, adding that no major hospital system in the state “has even gone to like a surge level.”
President Donald Trump traveled to the county on Friday on unrelated business. He was met by five local leaders, including a state senator and Gimenez.
From Miami, Trump traveled to Doral, where he received a briefing at US Southern Command, the US military command that covers the Caribbean and Central and South America. Trump will then go to a church nearby for a roundtable discussion with Venezuelans. After that, Trump will attend a private fundraiser in Hillsboro Beach. He is not scheduled to participate in any events related to the pandemic.
Florida health officials on Friday reported 11,433 new Covid-19 cases and 93 deaths, according to data on the Florida Department of Health website.
It’s the second time the state’s single-day tally topped 11,000, according to CNN’s count. The health department reported 11,458 cases on July 4.
California reported 149 coronavirus-related deaths on Thursday, the highest daily total for the state, and total cases topped 300,000 on Friday. California’s positivity rate as a 14-day average is climbing and stands at 7.4% with people between the ages of 18-49 accounting for almost 60% of all cases.
After outbreaks and more than two dozen deaths in state prisons, the California Department of Corrections and Rehabilitation announced Friday that 8,000 prisoners will be released early by the end of August.
Texas reported 105 deaths on Thursday, also a 24-hour record for the state, and Gov. Greg Abbott does not anticipate next week will bring any relief.
“I think the numbers are going to look worse as we go into next week, and we need to make sure that there’s going to be plenty of hospital beds available in the Houston area,” Abbott said in an interview with KRIV-TV.
Also setting daily records for new Covid-19 cases were Utah with 850, Louisiana with 2,642 and Georgia with 4,484, health officials said.
Georgia is reactivating a makeshift hospital at the Georgia World Congress Center, a large convention center in downtown Atlanta, amid a rising trend in cases, the governor’s office said.

Following an increase in cases in Michigan, Gov. Gretchen Whitmer signed an executive order Friday requiring a face covering be worn in indoor public spaces. The order requires businesses to refuse service or entry to anyone not wearing a covering, the governor announced in a release.
Violating the order, which goes into effect Monday, could bring a $500 penalty.
There are exceptions, including while people are eating and drinking at a restaurant.
North Carolina set a record Thursday for the highest number of hospitalizations and posted the second highest number of cases for the state, said Gov. Roy Cooper.
“Though North Carolina isn’t a surging hot spot like some other states, we could be if we don’t stay strong in our fight,” he said.

According to Johns Hopkins, there are at least 3.16 million cases of coronavirus in the US, and at least 133,885 people have died.
The nation’s leading infectious disease expert warned Americans throughout the week that the nation is still “knee deep” in the first wave.
“We’ve never really gotten out of it,” Dr. Anthony Fauci said in an interview with SiriusXM Doctor Radio airing on Friday. Fauci is the director of the National Institute of Allergy and Infectious Diseases.
Dr. Peter Hotez says he’s so alarmed by the rising numbers that he has a hard time sleeping.
“One (reason) is this steep acceleration,” Hotez, dean of tropical medicine at Baylor College of Medicine, told CNN on Friday morning. “We’re approaching (Fauci’s) apocalyptic prediction of 100,000 cases a day.”

While it’s impossible to maintain stringent coronavirus restrictions and return to a sense of normalcy, there is a middle ground, Fauci said.
“Rather than think in terms of reverting back down to a complete shutdown, I would think we need to get the states pausing in their opening process. Looking at what did not work well and try to mitigate that,” Fauci told The Hill’s Editor-at-Large Steve Clemons.
The all-or-nothing approach to socialization, and in Florida’s case reopening too fast, contributed to the return of the virus, Fauci said on Podcast-19, FiveThirtyEight’s weekly podcast on Covid-19.
“There are some governors and mayors that did it perfectly correctly,” he said. “But what happened is that many of the citizenry, said, ‘You know, well, I’m either going to be locked down or I’m going to let it all rip.'”
Fauci has stressed the risk in congregating, and he recommended Thursday that the nation reevaluate recommendations on when to reopen bars and indoor restaurants, saying they pose one of the “real problems.”
Even with the restrictions currently in place, only half of Nevada’s bars were found to be in compliance, said Gov. Steve Sisolak. As of 11:59 p.m. local time on Friday, bars in certain counties will revert to similar restrictions in Phase 1 of the state’s reopening plan.

Precautions become mandates in ‘a fight for our lives’

Local leaders are moving from encouraging precautions like masks to mandating them.
At least 36 states plus the District of Columbia and Puerto Rico have a mask order, and some cities require them even when their states don’t. Kentucky Gov. Andy Beshear signed a mask order Thursday.
Mississippi Gov. Tate Reeves made masks mandatory Thursday for the 13 counties seeing the greatest spikes. Businesses will not be required to shut down, but social distancing also will be required in those counties.
“Mississippi is in a fight for our lives,” he said.